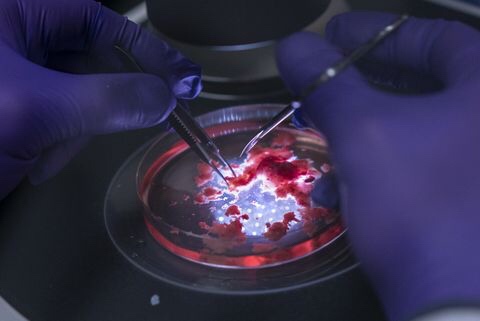 Xuyu Qian yanked open an incubator door at the University of Pennsylvania to reveal rows of cylindrical tubes swirling, like shaken-up snow globes, with a strange and exotic flurry. The pale, peppercorn-sized spheres were lab-grown globules of human brain tissue, or, as Qian occasionally refers to them, “minibrains.”

“Minibrain” is a controversial nickname, loathed by some scientists who fear it conjures alarmist images of fully functioning brains trapped in vats, while the reality today is balls of cells that can’t think or feel.

But the term vividly evokes the aspirational goal of this fast-moving area of research: to mimic the complexity of the human brain and illuminate the biology of the human mind, one of science’s darkest black boxes. As the technology, which scientists refer to in journal articles as “cerebral organoids,” improves, the more the “minibrain” title fits.

Today, organoids that resemble different regions of the human brain are routinely spun up from stem cells in large batches in laboratories around the world. Researchers have refined their recipes since the technique was first described five years ago, but the process is surprisingly hands-off: after a few nudges from scientists, stem cells grow into spheres with about a million neurons through a naturally occurring choreography that mirrors early brain development in the womb. At Day 100, Qian’s minibrains resemble a portion of the pre­natal brain in the second trimester of pregnancy.

“People are more worried about if they reach a certain level — if it’s really like a human brain. We’re not there; we’re very far from there,” said Hongjun Song, who leads the laboratory at Penn’s Perelman School of Medicine, where Qian works. “But the question people ask is, ‘Do they…