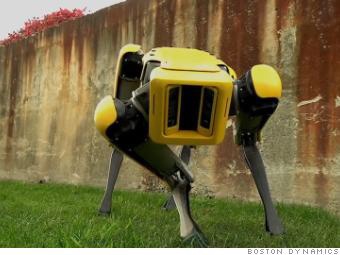 SpotMini, the robotic dog and social media sensation, is looking for a job.

Boston Dynamics, the company behind the cybernetic canine, excels at two things: designing cool robots, and making viral videos of them in action. SpotMini has racked up an impressive 30 million YouTube views in just a few years, and a photo of the robot strolling along side Jeff Bezos blew up on Twitter in March.

But Boston Dynamics CEO Marc Raibert thinks its time for his social media star to earn a real living. Goodbye, relaxing walks with tech titans. Hello, windowless warehouses. Raibert sees the 66-pound robot thriving in construction, delivery jobs, security, and, eventually, homecare, and says the company plans to begin producing 1,000 of them annually by the middle of next year.

“It’s up to all of you to think of the application,” Raibert told a roomful of robot enthusiasts gathered at a conference in Hanover, Germany earlier this summer. To help spur their imaginations, he showed a video of SpotMini patrolling dim corridors, a scene that might bring to mind a particular episode of “Black Mirror.”

Boston Dynamics remains at the forefront of robotics. Most of the famous robots that preceded SpotMini were little more than “trashcans on wheels,” said Chris Atkeson, a roboticist at Carnegie Mellon University. SpotMini, which stands slightly taller than two-and-a-half feet and features 17 joints, is one of a new class of machines that gets around on two or more legs and exhibits surprising balance and agility. An arm attachment even lets it open doors and pick up small objects.

“Boston Dynamics is so far ahead of everyone else,” Atkeson said. “The Boston Dynamics guys are like Elon Musk. They want to go to Mars. they’re aiming high. Perhaps that makes it hard for them to do something simple.”

That could be a problem. SpotMini may be too complex and too expensive for many of the applications Raibert has in mind, robotics experts said.

The most successful robots tend to be simple. Consider the Roomba. When the autonomous vacuum cleaner hit the market in 2002, it relied upon nothing more than a random number generator to bounce around a room at random. Even now, it remains a fairly simple device. It’s the same story with the first robots that cleaned swimming pools — they’d turn at random after hitting the edge, Atkeson said.

The technology has advanced, but still remains far less complex than Boston Dynamics is proposing. Take delivery robots. Wheels are simpler, cheaper, and more efficient than legs, which explains why many of the startups developing delivery robots favor them. Kiwi Campus has deployed a fleet of 50 wheeled delivery bots at the University of California-Berkeley since last year. CEO Felipe Chavez Cortes considers legs impractical, because warehouses, city streets, and other places tend to have flat, relatively smooth surfaces.

“Legs are an over-engineered solution, they’re not practical for delivery,” he said.

Cost is another limiting factor. Boston Dynamics has not said what SpotMini might cost, and the company did not respond to a request for comment. Atkeson said he expects it to cost about as much as a new car. That could be a tough sell as well if there are cheaper robots available.

“If a very expensive robot cleans the room just the same as a robot that costs one-tenth of the price, you go with the simpler one,” said Lior Elazary, whose company, inVia Robotics, builds warehouse robots.

The challenge of using SpotMini in homecare — an area where there’s a lot of potential for robotic assistance — comes down to two things. First, robots doing such work must be able to navigate complex environments that change often. InVia Robotics set out to develop elder care robots, but soon found its technology could perform just 20-30% of the required tasks. That’s why it shifted to developing robots for warehouses.

Beyond that, how a robot looks is important in the healthcare space. People must feel comfortable around the machine, Atkeson said. SpotMini isn’t warm and fuzzy. Some may even call it creepy. If SpotMini is work with the elderly or the ill, it must be approachable, he said.

Science backs him up here. MIT researchers have found that robots that display emotions can use them to improve their interactions with humans, and help achieve their goals.

Last summer, a wheeled security robot dubbed Steve made headlines when it toppled into a fountain in Washington DC, just days into its new job patrolling a retail and office complex. People created an informal memorial “in loving memory of our security robot … but more importantly, our friend.” It was tongue-in-cheek, but it spoke to the fact people cared enough to even make the joke.

That’s not to say Boston Dynamics won’t overcome these challenges. And it’s worth noting that some of Raibert’s suggestions make sense. You could see SpotMini doing search and rescue work, an area of increasing focus for researchers developing robotic snakes, and even swarms of small insect-like robots.

But the most exciting possibilities may lie in the company’s goal of making SpotMini a platform. Raibert envisions it becoming the “Android of robots.” The hope is that others will create software and hardware that will add to what the robotic dog is capable of, similar to how app creators make our smartphones more useful.

At that point, SpotMini might not be desperate for a job, but a vacation.