This outer region of our solar system is thought to be around 100 times further from the Sun than Earth is. In the region, the charged particles that emanate from our Sun meet with uncharged atoms of hydrogen from interstellar space. The concept of an atom having “charge” requires a little bit of knowledge about matter.

This wall of hydrogen scatters incoming ultraviolet light, creating a strange bubble type thing around the space that contains our Sun and every planet in our solar system.

The “wall” had actually been detected for the first time about 30 years ago, when NASA’s Voyager 1 and 2 spacecraft found evidence to support its existence. Now, New Horizons has completed the task of finding new evidence for it, along with all the other myriad things the spacecraft has helped along. Soon, a paper describing these findings will be published in a journal called the Geophysical Research Letters.

Dr Leslie Young, co-author of the paper from the Southwest Research Institute in Colorado said “We’re seeing the threshold between being in the solar neighborhood and being in the galaxy.”

Making use of its Alice UV spectrometer, New Horizons detected the wall at the edge of our Solar System with measurements taken in a 10 year period of time, from 2007 to 2017. An ultraviolet glow of light known by the name “Lyman-alpha line” was identified, and they knew this glow is created when solar particles clash with atoms of hydrogen.

All over the solar system in fact, we can spot this ultraviolet glow known as a Lyman-alpha line. However, at the edge of the solar system where the heliopause is located, a larger glow is present due to what researchers believe is an additional source, caused by the wall of hydrogen.

Compared to the front of the hydrogen wall, there is more ultraviolet light, which suggests the wall is scattering the light. “This distant source could be the signature of a wall of hydrogen, formed near where the interstellar wind encounters the solar wind,” the scientists wrote in their paper.

While this is still a theory, there’s another more far out possibility: that some unknown, other source of ultraviolet light in our galaxy is causing this background glow at the edge of our solar system.

So New Horizons, the interesting space probe now well past Pluto in deep space, will continue advancing until it eventually crosses this wall. We could actually get photographic images of this wall once it crosses, and then they will know if the ultraviolet light being detected decreases. That will make it more certain whether this wall is really there or not.

Surprisingly, Voyager 1 and 2 are already both past this wall, deep into space. Therefore, they can’t make further observations on it and missed the chance. 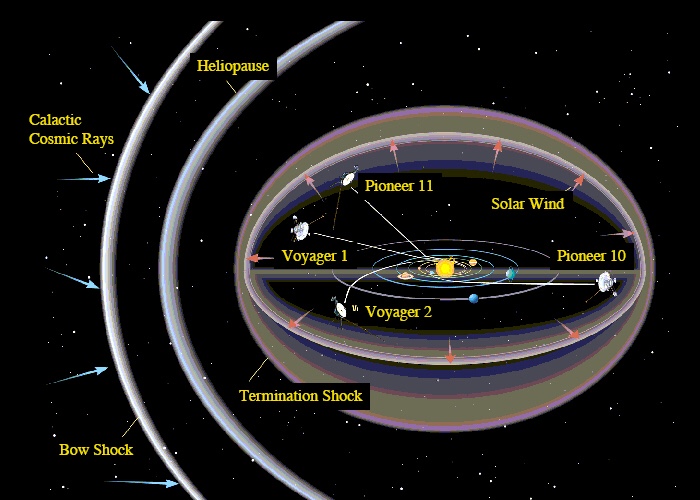 New Horizons is currently 42 times further from the Sun than Earth, which took 12 years. Now, it’s on the way to exploring a new target known as “Ultima Thule,” after flying past Pluto in 2015.