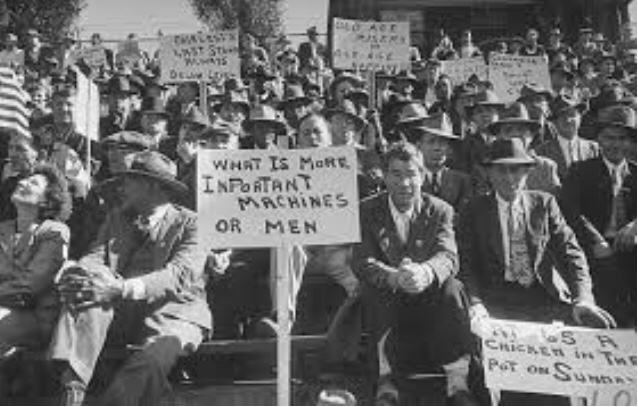 No one wants to pay you for your labor.

You read that correctly—your work has no economic value. Society needs you to work, or civilization will fall, but we’re not gonna pay you on our dime. Various politicians might give lip service to the importance of the family or the rights for workers to earn a living wage, but in the plain truth is, for most of history, caregivers and laborers have been viewed as nothing but slaves. That we even paid a living wage to our labor class from the early 1940’s till the early 1990’s is a miracle, and a first in modern society.

Now might seem harsh to call our caregivers and laborers slaves, especially since the Feminist and Labor Movements of the early 20th century did so much to change that outlook, but the truth still remains. For even though Feminists would like to deny it, raising children takes time and attention which means an employer’s and children’s needs are often at odds. And even though the stock market hates it, the men and women doing the most labor-intensive work in our society actually need to eat and sleep under a roof at night.

While Feminism made strides in opening doors for women to get their slice of the economic pie, they have yet to solve the problem that children need to be raised and that work of caregiving deserves a living wage. And while Unions popped up all over the land fighting for justice for those who work the factory line, build our roads, extract and mine our minerals, put out of fires and protect us from harm, they’ve lost ground in the past twenty years, no longer able to extract living wages, retirement, safe work conditions and other benefits from employers, and instead leaving those who do the most dangerous work in our world behind in poverty.

I’ve think about this a lot and how a Universal Basic Income might finally grant ALL those who work the freedom to choose their masters. I’ve written about UBI from a feminist perspective, a technological perspective, as well as an economic perspective. I’ve even suggested that money isn’t even real, at least not the way you think. My study of wages, money and reward has led me to the unseemly fact that all civilizations, including the one we now find ourselves living in, were founded on unpaid labor both within the home as well as the most labor-intensive part of the economic pipeline—those jobs that need the most physical effort.

Consider this, the first law on the books against slavery was made in 1777 CE, when the state of Vermont outlawed it. The first nation to outlaw slavery was England, in 1807 CE.  Slavery is one of the cornerstones of human society and there’s evidence that it existed long before writing. Most experts agree that the concept of owning another person only became affordable with the advent of towns and cities, where surplus food from the countryside was stored, which may have started as far back as 10,000 B.C.E. Thus for at least 12,000 years, the idea of owning a human was completely acceptable. Slavery is even older than currency, and while we no longer allow slavery in most of the first and second world economies, our monetary systems were based on a significant portion of the work being free. Owned humans provided labor in two key areas: the raising of children and household maintenance (mostly women) and the extraction of raw materials for the creation of goods, and the building of infrastructure (mostly males).

In the female realm, marriage contracts provided this free labor. Women were sold by their fathers to potential husbands (the exchange of a dowry), and then mated to produce and raise children. In addition to birthing and raising children, wives also took care of the home, the elders, prepared food and provided free labor for the social structures needed within the community. In exchange, they were given food and a home.

Of course, there was sometimes romance and love in this situation, but monetary policy cares nothing about love. The economic conditions of the marriage arrangement at its most basic is one in which the husband provided food and shelter for a mate who provided children and the labor of the home. Women in most societies didn’t chose who their husband would be, their family did. And within that economic system the labor of the home was unpaid, and still is to this day. As wealthier classes came into existence, wives of rich merchants or nobles for example, were able to purchase slaves, usually women, to help them run the household. This would free the women of the upper-class to educate themselves and eventually they would be the ones to see the economic inequality within marriage, and begin to fight for the liberation of women, starting with women of privilege.

Yet to this day, women of means need lower-class women to do the work of the home so that they can “lean into” the workplace and make their fortune, and too often, the lower-class women that make it possible for some of our sisters to break the glass ceiling struggle to make ends meet. Since the liberation of women into the workplace, and all of the property, fertility and divorce rights that went with it, the work of the home is at best a minimum wage job with no unemployment, retirement or health benefits, whether providing care for the children, or cleaning the house. And for those women who chose to do this work themselves, the wage is zero.

In the male realm, slaves were used to do the hard work of extraction, whether in the mines or in the fields, or building infrastructure, such as roads, monuments and aqueducts. Men were sometimes born into slavery, but more likely taken by war into slavery. Slaves were the great prize in any battle. Their unpaid labor is what fueled our economies for centuries upon centuries. The Sumerians, Greeks, Egyptians, Romans, Mongols, Europeans, you name it, all of those empires were founded on the unpaid labor of male slaves. Their back-breaking work was the origin for all goods, and still is. We can’t have computers without the mines, and someone has to extract the minerals. Google Lithium Mine Workers and enjoy the story of the tech industry’s slave labor.

We’ve made strides to use technology to advance this aspect of labor, yet until the 1800’s, the business plans for all enterprises had at their foundation slavery—the extraction of everything from bananas to chocolate, to sugar to gold was done by unpaid slaves. Hence, the most grueling aspects of business were done for free. The only obligation the slave owner had was to house and feed their slaves, to the extent that they wanted productivity from their purchase. Hungry men can’t crawl on their bellies all day in the coal mine tunnels. Men without shelter won’t live very long. Thus, the labor wasn’t exactly free, just like the women doing the work of the home, the men doing the work of the fields needed food and shelter, and their owners provided it.

It is within this structure of unpaid labor that currency was born. And in many ways, we’re still operating in the same way, for even though we’ve come to accept, in part, that humans can’t be owned, that we should be compensated for our labor, and have a choice as to where we invest our labor, our monetary system still trends towards free and unpaid labor as the foundation of its success. Wages and benefits are the largest portion of any profit and loss statement. Reducing those costs is the easiest way to raise profits.

We have the understanding that all men and women are equal under God, but have yet to create an economy where all labor is paid. It’s the economic need for slaves that made the early Greek philosophy of the rights of the individual dangerous. This is why they gave Socrates a cup of poison hemlock, at some level they knew where “know thyself” was going. For once the individual human is glorified, then the issue becomes which humans are to be free? Citizens? Slaves? Women? What do you do when the rights of the individual are in direct conflict with the economy in which you live?

When America outlawed slavery, it fell to the employer to make sure the laborer was paid enough to provide his own food and shelter. Emancipated slaves lost the protection of their masters but gained the freedom to choose who they would work for. The transition wasn’t pretty, and many people were taken advantage of in the early Industrial Age. Enter the Labor Movement. And we’ve been struggling to make the balance sheet work ever since. The end of slavery flooded the paid labor market with freed slaves. Later the Feminist movement would add educated women to the labor pool, and now labor is cheap. So cheap it can no longer pay for food and shelter. In the end, supply and demand will always have its way.

This is why the Labor Movement worked so hard to make sure that the profits created by the work of human hands be distributed to the workers themselves. Yet today, many working-class men and women find themselves unemployed, with no one ensuring they have food and shelter. People who broke their backs, some literally, to give us the world we live in, are ignored, unseen. The economic system might have bent for a while to ensure the dignity for those who labor, but as soon as it could ship the jobs overseas where slavery still exists (China, Burma, Taiwan), businesses did just that, and our government looked the other way. It’s only a matter of time before those slaves are replaced by machines. Consider Foxconn, the maker of iPhones. In 2010, their workers began committing suicide. The answer? Better wages, or working conditions? No, the solution was robots to replace at least 60,000 of them in 2016. Even the low-paid Chinese worker with no union rights is too expensive. Better to replace them with machines.

What then to do with our unemployed laborers? What to do for the caregivers that earn less than a living wage? How do we create a world where their work matters? The work of extraction and building must continue, even with machines at our sides. And the work of caring for children and our elders is important work. Often laborers and caregivers are the heart and soul of their communities. Do we let them go hungry, so that the coders and financiers of the world can make millions and break glass ceilings?

I find it strange that we’d rather pay a low-income woman money for sub-par childcare, but not pay her money to raise her children herself. We’d rather subsidize an out of work laborer with food stamps, than pay him a living wage to fix up houses in his neighborhood, clean up rivers and lakes polluted by industry, or use his body to protect his people and then reward him for it (just think of how we treat our veterans). Universal Basic Income, especially when combined with Social Credit projects such as the one Democratic presidential candidate Andrew Yang  proposes, can take the ideal that all of us are free one step further. This is the unfinished business of the great worker and women’s movements of the 20th century. Universal Basic Income is the completion of the promise to the caregivers and the laborers of our nation. It’s the only way to create an economy that is no longer at odds with human rights, and instead works FOR the people, rather than against it.