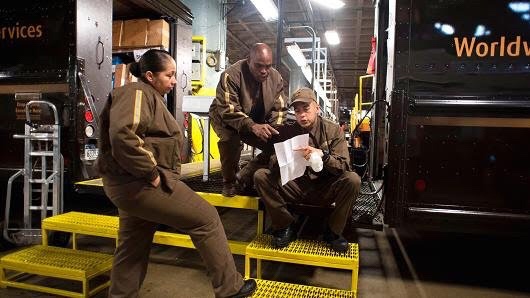 United Parcel Service (UPS, +0.18%) workers authorized their union to call what would be the first strike since 1997, giving negotiators more leverage in talks to replace a labor contract that expires at the end of July.

Of the workers from the package unit who voted, 93% favored the authorization and 91% of UPS freight employees agreed to the measure, the International Brotherhood of Teamsters announced on a webcast. The rate of voter participation wasn’t provided. A strike authorization is common during negotiations to put pressure on the company, said UPS spokesman Glenn Zaccara. Even with that, the union can’t go on strike until after the current contract expires on July 31.

“UPS is confident in our ability to reach an agreement that meets the needs of our employees and the business,” Zaccara said.

The labor talks are proceeding amid discussions on pay and work schedules, as UPS looks to increase warehouse automation to keep up with surging demand from e-commerce shipments. The union has proposed increasing the part-time starting wage as well as improving the overall pay structure, according to a statement on its website. It’s also pushing the courier to increase contributions to health and welfare and pension funds.

Union leaders urged support for strike authorization in a letter dated May 15 and signed by James P. Hoffa, general president of the Teamsters, and Denis Taylor, co-chair of the union’s UPS National Negotiating Committee. The last time negotiations broke down was in 1997 when drivers went on strike for less than three weeks before terms were reached.

“Nobody wants a strike. It hurts the company and it hurts members,” they said in the letter. “However, the ability to strike is necessary in order to ensure a timely and positive conclusion to negotiations. We have to show that we’re not afraid of striking.”

UPS declined 0.1% to $116.81 in New York. The shares have lost 2% this year, compared with the 1.1% decline of a Standard & Poor’s index of industrial companies and an advance of almost 1% for FedEx Corp.

Voting began in the middle of last month and concluded June 3. About 260,000 UPS workers are employed under a national master agreement with the union, the company said.

UPS and the Teamsters already have reached tentative agreements on a “wide variety of non-economic issues,” Zaccara said.