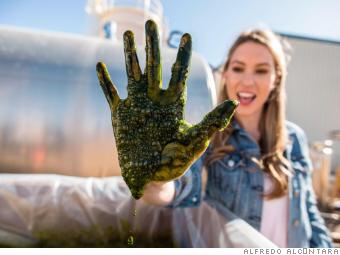 I have commitment issues — with my diet.

Name the diet, and I’ve tried it. I’m currently a pescatarian with fish as my main protein source. But I’ve been a carnivore, vegetarian and vegan, too.

Oh, and I dabble in “menu of the future” items such as algae and bugs.

In the last month, I’ve had algae smoothies, algae protein bars and algae chips. It’s not because I’m a particularly adventurous eater or that I love the taste. I actually loathe the mossy flavor of algae.

I eat it because I’m a worry wart when it comes to our environment. We’ve gotten ourselves into some trouble. Our dining habits are a big part of the problem.

The average American male consumes 100 grams of protein daily — almost double the necessary amount. This overconsumption isn’t sustainable. The United Nations projects food production will need to increase as much as 70% by 2050 to feed an extra 2.5 billion people.

To survive, we need to reinvent the way we farm and eat. Experts say algae could be a possible solution. Unlike most crops, it doesn’t require fresh water to flourish. That’s a big deal. About 70% of the planet’s available fresh water goes toward crops and raising livestock.

Meat uses up a lot of our finite resources, like water and land, not just for the animals but to grow their food, too. But the green slimy stuff that lives in oceans, ponds and aquariums can grow fast, is packed with nutrition and needs next to nothing to grow. It can even grow in a desert.

Several weeks ago, I visited algae farm Green Stream Farms in the sleepy town of Columbus, New Mexico, a stone’s throw away from the Mexican border. With a location that feels like you’re in the middle of nowhere and a population of 1,600, you’d never expect this is where the food of the future comes from.

But that’s where wellness company iWi is growing a strain of algae on a massive scale. The farm has green seas as far as the eye could see. The entire farm is 900 acres — 98 of which are currently being cultivated — and operates all year round.

At the farm, I got my hands dirty. I wadded thigh-high in a sea of green algae and reached my hand into a vat of the harvested “green gold,” coating it in cold, verdant goop. Feeling bold, I licked the dripping algae off my finger.

It was a far cry from the gross-tasting algae I’ve had in the past. That’s because not all strains of algae smell or taste like pond scum. Some algae I’ve tried before even turned my tongue black-green. But the farm’s fresh algae simply tasted salty and gave me hope people would willingly eat this.

“There are hundreds of thousands of strains of algae in the world and there is a subgroup of those that are stinky and slimy and gross, but there are lots that are not,” said Rebecca White, iWi’s VP of Operations.

IWi is betting their strain, nannochloropsis, will be next big food trend. The company already sells algae as omega-3 and EPA supplements at the The Vitamin Shoppe and on Amazon. It’s now developing algae-based snacks and protein powders.

“The protein we’re producing is not going to be green,” said CEO Miguel Calatayud, adding its protein powders will be virtually imperceptible when added to other foods. It is “not going to change the flavor.”

“[It will be] in every single food that you take on an everyday basis,” he added. “Algae is going to be part of a regular food chain for us. It’s going to be great thing for all of us and for our planet.”

Calatayud said if the world’s population grows from 7.5 billion to 10 billion as expected, we’ll need to think more seriously about protein alternatives like algae.

IWi’s strain of algae takes what would otherwise be wasted — saltwater, desert land and CO2 — and turns it into something special. Made up of 40% protein, it can produce about seven times the amount of protein as soybeans on the same amount of land. The plant also releases oxygen into the air. (About 50% of the world’s oxygen comes from algae).

“There are tons of desert areas all over the world and most of them have brackish water underneath,” he said. “What we are building it’s 100% sustainable and 100% scalable.”

When it comes to actually growing algae, the approach falls into two classes: an open method in an environment like a pond exposed to the elements, or a closed system in a photobioreactor with a more controlled environment. IWi uses an open method by harnessing the power of the sun to feed its algae.

Algae at the farm is grown in long ponds called “raceways,” and an engine constantly churns water to make sure the algae is exposed to the sunlight. CO2 and a tiny bit of fertilizer is then pumped into the water to help the algae bloom.

Algae isn’t the only protein alternative scientists are tinkering with. Lab-grown meat companies such as Memphis Meats, Beyond Meats and Impossible Foods are working to popularize cultured meats and plant-based meat substitutes. Their products are currently on supermarket shelves and have a sizable following with vegetarians and vegans.

Other meat alternatives include bugs — especially crickets, largely considered the tastiest insects. I’ve popped them into my mouth like potato chips. The hardest part is wrapping your brain around eating something you’d usually spray with Raid or squash with a book.

But they don’t taste that bad. I’ve even had some bug-based dishes that were truly delicious. When crickets are ground into flour for protein powder, it’s unrecognizable. Form factor matters.

More than 2,000 edible bug species are eaten by 2 billion people worldwide, and for good reason.

“Insects are rich in protein and essential micronutrients, such as iron and zinc,” Halwart said. “They don’t need as much space as livestock, emit less greenhouse gases, and have an excellent feed conversion rate.”

Perhaps it’s only a matter of time before Western countries stop turning up our noses at plated insects and start chowing down.

And algae for dinner may be a long shot for now, but the powerful potential of this tiny super crop can’t be ignored.