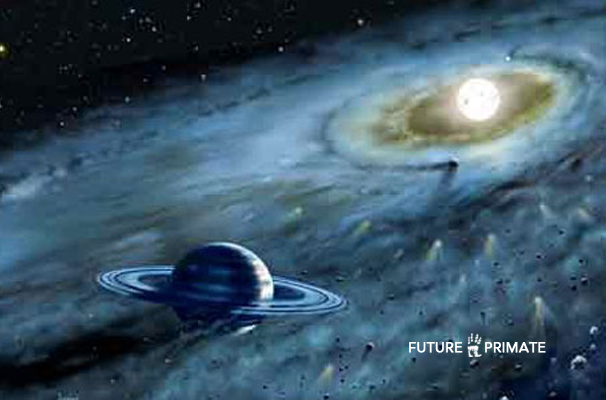 Life is tenacious. It has been found to thrive in the most inhospitable circumstances (certain microorganisms, like the tardigrade, can even survive in the vacuum of space). Ultimately, no matter where we look on this planet, where there is liquid water, there is life. This fact makes the latest news from University of Maryland Astronomy Professor Drake Deming all the more exciting.

He led a team of astronomers who found water vapor in the atmosphere of a planet that is four times the radius of Earth (roughly Neptune-sized). The planet in question, dubbed HAT P-11b, is located in the constellation Cygnus, which is a staggering 124 light years – or nearly 729 trillion miles (1.1 quadrillion km)- from our home planet (which is quite a ways to travel for a drink). Perhaps most notably, this latest discovery is the smallest planet upon which scientists have been able to identify some chemical components in the atmosphere, and the discovery indicates that astronomers’ ideas about how the planets form apply to planetary systems aside from just our own.

The findings will be published Sept. 25, 2014 in the journal Nature and are based on analyses of observations by three different NASA telescopes.

The Search for Water

Ultimately, scientists are able to detect water because of light. Sound implausible? When a planet passes in front of its host star (a process that is known as a “transit”) material in the planet’s atmosphere absorbs some of the star’s light. This process makes the planet appear bigger. And by measuring the changes in the size of the alien world as is transits the star, astronomers can determine the constituents of the planet’s atmosphere.

This is accomplished by plotting the changes in the planet’s size and comparing them to the wavelength of electromagnetic radiation that the telescope observes. This gives astronomers a graph (a “transmission spectrum”) that shows how much of the star’s radiation the planet’s atmosphere is absorbing (the shape of that graph is what reveals what chemicals are present in the atmosphere).

In the press release, the University of Maryland notes: “The bigger the planet, the more obvious are the changes in the planet’s size during its transit across its host star. Astronomers have used this technique to describe the atmospheres of several giant planets, the size of our solar system’s Jupiter. In this study, the team wanted to analyze the atmosphere of a significantly smaller planet.”

HAT P-11b is just about four times the radius of Earth, but about 26 times Earth’s mass (making the alien world closest in size to Neptune). However, this exoplanet is much closer to its host star (and therefore much hotter) than Neptune. about 878 degrees Kelvin, or 1,120 degrees Fahrenheit or 470 degrees Celsius. It is believed to have a rocky core that is covered in a gaseous envelope of about 90 percent hydrogen. Its atmosphere is cloudless at high altitude, but the team found that it contains the signature of water vapor.

Why do astronomers look for water on exoplanets? As previously mentioned, it is a breeding ground for life as we know it.

The prerequisites for our kind of life is simple on the surface. Carbon-based lifeforms clearly demand carbon and the presence of liquid water, as well as a source of energy (in our case, generally speaking, the sun). And because it is a precondition for life as we know it, we need to find it if we want to have a reasonable expectation of locating other lifeforms – though the presence of water alone is not enough for life to arise. “The water molecule is widespread in the universe,” says Deming. “Wherever you have hydrogen and oxygen, it naturally forms. Even some sun spots are cool enough to contain water vapor, although obviously it’s far too hot for life on the sun.”