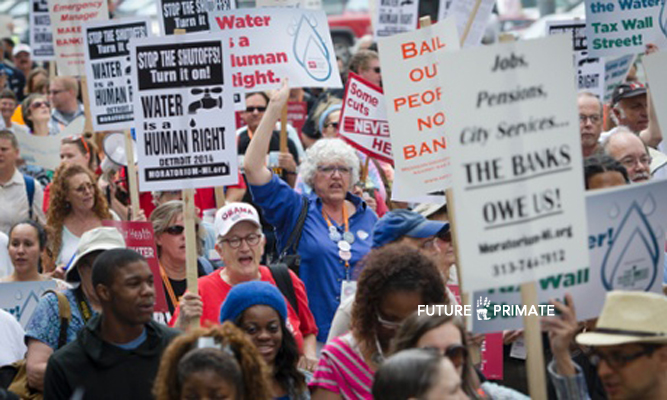 A crowdfunding campaign is seeking to match donors with Detroit residents who are behind on their bill payments and face having their water shut off.

By Wednesday afternoon, more than 1,500 donors had signed up on the website Turn on Detroit’s Water, which was created last week by Tiffani Ashley Bell and Kristy Tillman. The pair say they were looking for a way to help some of the more than 80,000 of the city’s residents who are overdue on their water bills.

“We both felt like there’s something we should be doing,” Bell said. “And we both came to the conclusion that we would pay someone’s water bill for them, if we could actually help with that.”

Individuals, but not businesses, can submit requests for help on the website by providing their Detroit Water and Sewerage Department account number, and overdue amount. They are then matched with people who provided an email address, and the amount of money they can contribute to help those with overdue payments. Even small donations are accepted, as multiple payments can be made to single accounts.

City officials on Monday agreed to a two week hiatus on the water-cutting tactic – which is meant to help recoup $89m in overdue water bills – giving people who say they can’t afford payments time to find a solution. The water department will also be using that time to inspect properties that have illegally turned their water back on and possibly issue steep penalties.

Bell and Tillman, who live in Oakland and Boston respectively, wanted to create a system that allows people to pay directly to the source and provide immediate relief. Of the 320 people who have requested help for bills that are as high as $5,500, 19 have had their bills completely paid off, including one person who owed the city $500.

“At this point, it’s totally giving you a clean slate to work from,” Bell said. “You can take it from there on your own.”

Of the $18bn in debt Detroit reported in its bankruptcy filing last year, $5.4bn is related to water and sewer bonds.

Bill Johnson, a spokesman for Detroit’s water and sewage department, said the agency was not aware of Turn on Detroit’s Water and is not affiliated with it. “It is not something we sanction or approve of,” Johnson told the Guardian.

Johnson said that if people are having trouble making payments, they do not need to rely on an outside source for help, because the agency has alternative payment plans available. “I would encourage people not to involve themselves in that,” Johnson said. “If they have a problem, we consistently say, bring it to us – come into one of our customer care centers and we will address the problem.”

He said that no one that has proven they have a legitimate payment problem has had their water terminated, and if they did and told the agency, it would be restored. “This whole thing about people being deprived of water and babies going without water and health conditions, we’re not seeing that,” Johnson said.