The COVID-19 pandemic has forced millions of Americans to work from home. But when it’s all over, many people are thinking that trip from the kitchen to the living room may not be such a bad commute.

A 58% majority report they are still working outside the home.

Once the economy reopens, 24% say they’d like to work either entirely or more from home compared to how they worked before, while 55% plan to head back to the office and 20% are not sure.

An increase of hundreds of thousands, or even millions, of people who shift to remote work would have major repercussions across the broader economy. For example, if businesses decided to save money by renting or buying less commercial office space as a larger percentage of their employees work from home, that could translate into hundreds of millions of dollars in losses for builders and developers.

A strong majority, 60% of workers, report being either as productive or even more productive than they were working from the office. 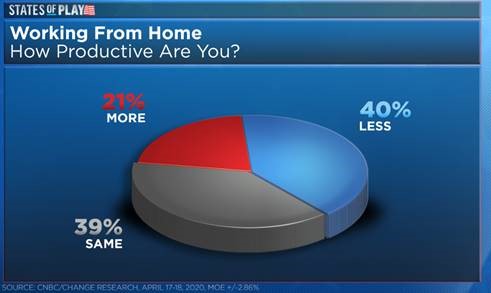