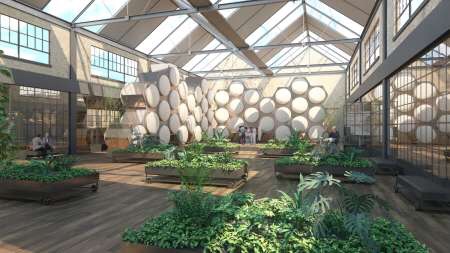 The world’s first funerary human composting facility is slated to open in the spring of 2021 after Washington State lawmakers legalized the posthumous process earlier this year. Seattle-based company Recompose will be the first to offer “natural organic reduction,” a process that owner Katrina Spade says gently converts human remains – bones, teeth, and all – into organic soil.

“The transformation of human to soil happens inside our reusable, hexagonal Recomposition Vessels. When the process has finished, families will be able to take home some of the soil created, while gardens on-site will remind us that all of life is interconnected,” writes Recompose on its website.

The new-age funeral home celebrated the opening of its first location in a 1,720-square-meter (18,500-square-foot) building last month after legislators changed state law regarding after-death services, making Washington State the first to allow human composting, reported The Seattle Times. SB 5001 “Concerning human remains” was signed into law in May, recognizing “natural organic reduction” as an acceptable means of the disposition of bodies. The law is set to go into effect on May 1 of next year.

At the price of an estimated $5,500 per person, the recomposition process costs more than a basic cremation but less than the majority of funerals. That cost includes transportation for Washingtonians, but recomposition will also be available to individuals from other states or countries who are able to arrange transportation.

Spade teamed up with soil scientist Lynne Carpenter-Boggs of Washington State University, who led the first successful recomposting trial using the remains of six volunteered bodies in what they dubbed a “Life Cycle Assessment,” which compared conventional methods against natural burial and organic reduction. Preliminary findings suggest that recomposition had less of an environmental impact than cremation or traditional burials, largely in part due to its ability to sequester atmospheric carbon in the soil. Estimates propose that a metric ton of C02 will be saved every time a person is organically reduced rather than cremated or conventionally buried. Additionally, Recompose says that they “minimize waste, avoid polluting groundwater with embalming fluid, and prevent the emissions of CO2 from cremation and from the manufacturing of caskets, headstones, and grave liners.”

“By allowing organic processes to transform our bodies and those of our loved ones into a useful soil amendment, we help to strengthen our relationship to the natural cycles while enriching the earth,” notes Recompose.

The Patent-pending process is modeled after green burials but redesigned for cities with less land. A body is placed inside of a reusable vessel, covered with wood chips, alfalfa, and hay and are then aerated to allow naturally occurring beneficial bacteria to do their thing. Heat-loving microbes facilitate an environment between 49°C and 71°C (120°F and 160°F), which was shown to destroy harmful pathogens. Recompose was not able to answer what species of bacteria partake in the process, but did note that they are naturally occurring on the body. Additionally, there is not enough evidence to suggest that the process breaks down prion disease or some highly infectious diseases like Ebola.

“In the very rare instance of these diseases, the patient would simply not be a candidate for recomposition, so Recompose would never come into possession of an exposed body. Eligibility for this process would be verified by healthcare professionals at the person’s place of death,” a Recompose spokesperson told IFLScience.

In just 30 days, the body is transformed into “soil which can then be used to grow new life”. Recompose says that it screens for non-organic materials (such as pacemakers, metal fillings, artificial joints, etc.) before and at the end of the 30 days to ensure the soil is organics. Most pharmaceutical drugs and antibiotics are naturally decomposed by microorganisms, the company adds.

“Natural organic reduction is a managed biological process used to convert organic material, including human remains, into a stable earthy organic material that is unrecognizable as human remains. During the process, change occurs on a molecular level,” said Recompose.

One person can create about a cubic yard of soil, which their family can take home and use in whatever capacity they see fit. Leftover soil will go toward conservation land in the greater Seattle area.