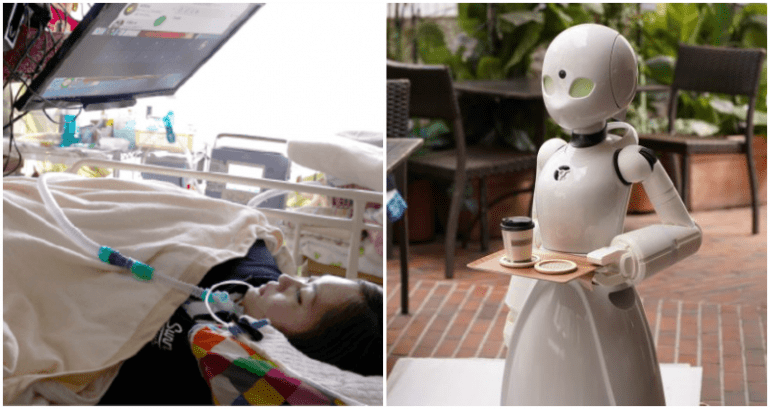 A cafe with an all-robot staff controlled by paralyzed people has opened in Tokyo.

Ten people with conditions like ALS and other spinal cord injuries are currently employed at Dawn, according to Sankei.

From home, they operate the OriHime-D, a 120-centimeter (4-foot) robot that communicates, moves around and handles objects.Behind the OriHime-D is Ory, a startup that develops robotics for disabled people.

In a video, a paralyzed man is seen “typing” commands through his eyes.The OriHime-D can also be used by people involved in childcare, nursing care or other activities that prevent them from leaving home or a certain location.

“Even those who can’t go out can work through this alter ego and have a role in society,” Ory noted.

Dawn (Diverse Avatar Working Network), based on the same cafe in the 2008 anime “Time of Eve,” imagines a coffee shop where humans and robots interact as equals, SoraNews24 noted.

The cafe, located in the Japanese capital’s Akasaka District, is a joint effort between Ory, All Nippon Airways (ANA), the Nippon Foundation, and the Avatar Robotic Consultative Association (ARCA).For their service, each operator is paid 1,000 yen ($8.80) an hour, the standard wage for part-time work in Japan.

However, Dawn will only run until Dec. 7 — as the beta in its name suggests.

The cafe relied on crowdfunding ahead of its opening, collecting more than twice its 1.5 million yen ($13,000) goal. With continued support, a full opening is expected in 2020.