It’s the type of experience expected at a top-rated restaurant: Diners gaze at produce growing in a hydroponic garden next to the kitchen. Behind plexiglass, herbs are carefully plucked in anticipation of being added to every plate.

This high-tech take on farm-to-table, however, is being built for the cafeteria of a New York City public school in Manhattan.

As part of a nonprofit program called Teens for Food Justice, a handful of schools in Brooklyn, the Bronx, and Manhattan have turned spare classrooms, unused science labs, and, in one case, an empty closet into urban hydroponic farms, an experiment in self-sufficiency, science education, and food equity.

It’s not unheard of to find produce grown within the five boroughs: supermarket chains like Whole Foods and companies such as Gotham Greens have helped pioneer and popularize large-scale commercial farming in New York City.

But Teens for Food Justice isn’t just about urban farming, it’s about using agriculture in the classroom as a tool to educate and empower communities without easy access to fresh produce.

“These communities lack access to healthy food,” says Katherine Soll, the founder and CEO of Teens for Food Justice. “How could we utilize a school program to make it possible for food desert communities to provide food for their community?” 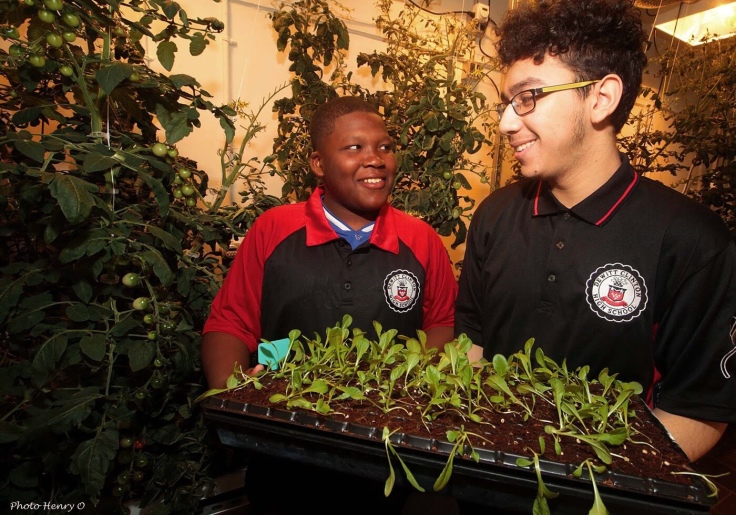 Teens for Food Justice now has more than 300 students in New York City public schools actively participating in hands-on learning, either during the school day or in after-school and weekend programming. The student farmers at the program’s three locations manage to raise an impressive annual harvest of leafy greens, herbs, tomatoes, and cucumbers: DeWitt Clinton High School in the Bronx grows 25,000 pound of produce a year, Brownsville Collaborative Middle School in Brooklyn brings in 15,000 pounds, and Brooklyn’s Urban Assembly Unison School nets 3,000 pounds.

After the food is harvested, cleaned, and cut, most of it gets used in school cafeterias to supplement existing dining options. Think salad bars with most of the items raised on site, including tomatoes, cucumbers, peppers, lettuce, kale, swiss chard, basil, and bok choy. Any remaining fresh produce gets sold at an affordable price to the community via farmer’s markets.

Soll initially became involved in student service and philanthropy in 2009. A mother of two on the Upper West Side, Soll was disappointed student volunteer options weren’t addressing issues of inequality in New York City, and decided to take it upon herself to create more community-oriented programming.

“There wasn’t any rich service learning opportunities,” says Soll. “We felt that was really the key to creating a generation of young people who were civically engaged and involved in local justice.”

Soll helped launch Students for Service, which offered a variety of service learning opportunities. Within three years, the program was working with more than 1,000 students across a variety of city agencies and nonprofits. As the program grew, volunteers often worked on issues of sustainability, emergency food assistance, and urban gardening. According to the New York Food Bank, 16 percent of New Yorkers are food insecure, meaning they lack reliable access to fresh food, and more than 1 million reside in “food desert” communities, which lack access to fresh food.

An idea started taking shape: what if you could create a Gotham Greens-esque program, but for schools, and they could sell produce into their local communities?

The first Teens for Food Justice garden launched in 2013 in Bedford Stuyvesant, Brooklyn, at Urban Assembly Unison School. Initially, the program worked on a volunteer basis, with students from across New York participating in after-school gardening. In 2016, TFFJ decided to change how it operates, focusing on drawing volunteers from within the school. By integrating the program in the school day, the thinking went, the program offered new classroom and learning opportunities.

“For a youth led-project to really move the needle, the community needs to drive it,” says Soll. “If you really empower the children and families and leadership, you can embed it deeply in the ongoing learning of the school.” 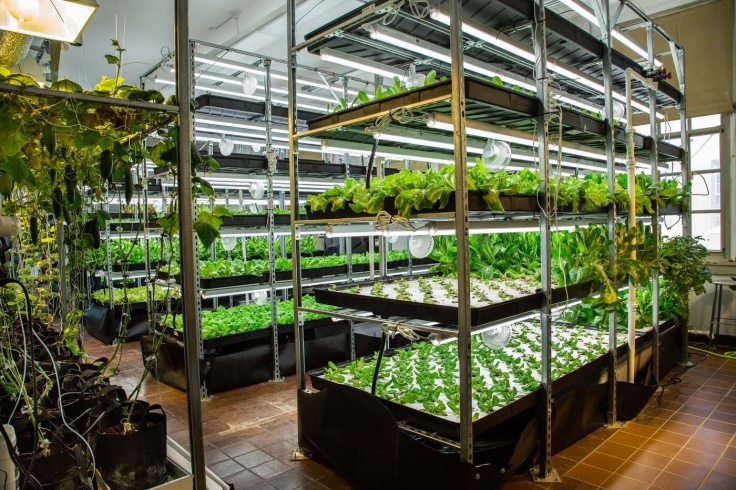 Supporting social change from the ground up

With funding and support from companies such as Whole Foods and Green Mountain Energy Sun Club, as well as support from city government, the program is expanding its aim. Soll says the program is looking to increase the size of the farm at Urban Assembly Unison School, build a new farm at Manhattan’s Martin Luther King, Jr. Collaborative School in Columbus Circle, where the garden-in-cafeteria-concept is taking shape, and potentially launch new in-school farms in Miami.

The focus on sustainability isn’t just about produce. Soll says the program is working with Boston Consulting to develop a more self-sustaining platform, to make it easier to expand into new schools while helping existing sites grow and make a great impact on their communities.

The benefits of onsite gardens go beyond fresh food (which is a big deal in food-insecure communities). Students gain lessons about biology and nutrition, and DeWitt Clinton High has incorporated farm work into AP courses. Evaluations discovered students learn a lot of soft skills around collaboration, and gain confidence in the garden. But more importantly, Teens for Food Justice shows teens how they can make an impact.

“When children speak passionately about an issue, adults listen to them,” Soll says. “If you believe your voice can be heard, and you believe you have the power to make a difference, that builds confidence on so many levels, and triggers engagement and involvement.”