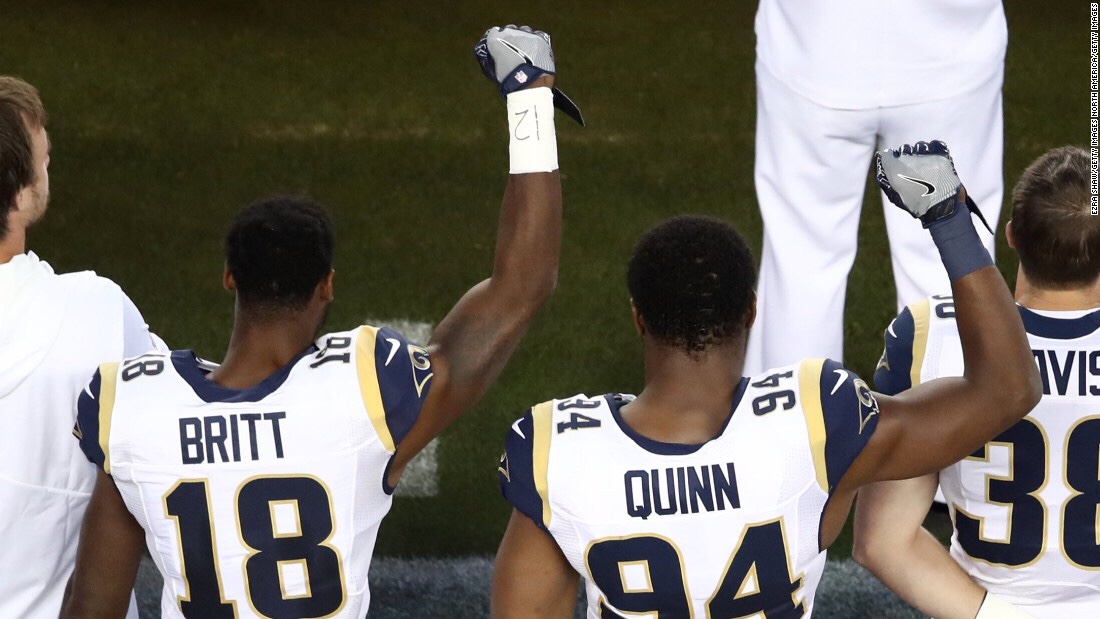 The NFL’s warmup games are in full swing — and the National Anthem protests are back.

Several players on Thursday took a knee, raised a fist or did not take to the field while the anthem was played before a dozen games as the league’s first full week of preseason contests kicked off. 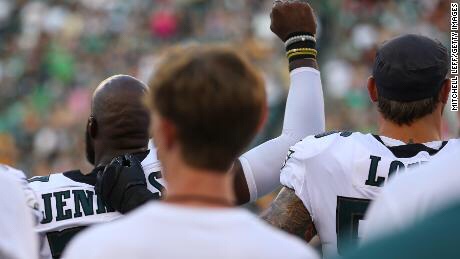 The action comes weeks after the league suspended what was supposed to be a new policy barring such demonstrations.

The anthem protests — meant to draw attention to racial injustice — have happened with varying participation since 2016, pulling the NFL into a public debate that has seen President Donald Trump call on team owners to stem them.

In Philadelphia, Eagles defensive end Michael Bennett walked out of the tunnel Thursday during the anthem and headed to the team bench ahead of a game against the visiting Pittsburgh Steelers, the Philadelphia Daily News reported.

“I just think it’s important to keep this conversation going, that we don’t let it get stagnant,” Jenkins said after the game, according to NFL.com. “You know, as we understand it, everybody’s kind of waiting to see what the league is going to do. … It’s just my personal decision to keep these things at the forefront.”

Trump, as he has in the past, took notice.

The NFL players are at it again – taking a knee when they should be standing proudly for the National Anthem. Numerous players, from different teams, wanted to show their “outrage” at something that most of them are unable to define. They make a fortune doing what they love……

“The NFL players are at it again – taking a knee when they should be standing proudly for the National Anthem,” the President tweeted Friday morning. “Numerous players, from different teams, wanted to show their ‘outrage’ at something that most of them are unable to define. They make a fortune doing what they love.”

Trump continued: “Be happy, be cool! A football game, that fans are paying soooo much money to watch and enjoy, is no place to protest. Most of that money goes to the players anyway. Find another way to protest. Stand proudly for your National Anthem or be Suspended Without Pay!”

…..Be happy, be cool! A football game, that fans are paying soooo much money to watch and enjoy, is no place to protest. Most of that money goes to the players anyway. Find another way to protest. Stand proudly for your National Anthem or be Suspended Without Pay!

In Miami on Thursday night, Dolphins wide receivers Kenny Stills and Albert Wilson knelt during the anthem ahead of their game against Tampa Bay, The Miami Herald reported. Dolphins defensive end Robert Quinn raised his fist during the song, according to WTVJ.

In Jacksonville, several Jaguars — including Jalen Ramsey, Telvin Smith, Leonard Fournette and T.J. Yeldon — were not on the field as the anthem played ahead of their game against the New Orleans Saints, The Florida Times-Union reported.

“When you look at people who are in prisons today, close to 60% of the prison population are people of color — these are the things that the players” are protesting, Stallworth told CNN’s Kate Bolduan. “They are eloquent and articulate, and they’ve explicitly said why they are protesting.

“I think that one of the best things that the players have talked about is that they’ve tried their best to ignore the President and continue to go to their local city halls, continue to meet with governors and attorneys generals, continue to donate hundreds of thousands, and even … millions of dollars” toward equality causes.

The NFL said it won’t punish the players who took part in Thursday’s protests, noting it had shelved what was supposed to be a new policy on anthem conduct until it reaches an agreement with the NFL Players Association. 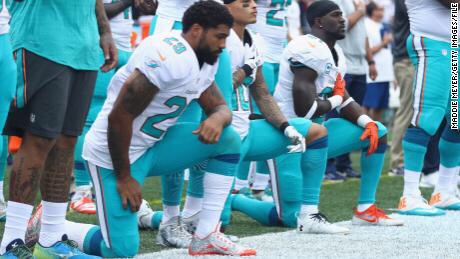 In May, team owners, reacting to a public backlash against the protests, issued a policy requiring that all team personnel who decide to be on the field during the song “shall stand and show respect for the flag and the Anthem.”

Players would be allowed to stay in the locker room during the anthem if they chose — but if any team personnel did kneel on the field, the team would be fined. The teams then could decide how and whether to punish offending personnel.

But in July, the players association filed a grievance, saying the new policy infringed upon player rights and was enacted without consulting the union.

A week later, the NFL said it would put the policy on hold so it could discuss a solution with the association.

Colin Kaepernick kicked off the protests in 2016

The anthem controversy has been rumbling since 2016 when then-San Francisco 49ers quarterback Colin Kaepernick knelt during the anthem to draw attention to racial injustice. 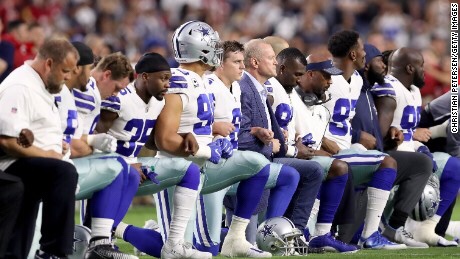 An increasing number of players joined him, but critics perceived the protests as unpatriotic and disrespectful of the American flag and US military.

The issue came to a head when Trump said in September that NFL owners should tell protesting players, “Get that son of a bitch off the field right now, he’s fired. He’s fired!”

Soon more players began to kneel during the anthem, and the controversy in the most popular sports league in America became a partisan talking point.

In a tweet, Kaepernick lauded Stills and Wilson, two of the Dolphins who protested Thursday night. 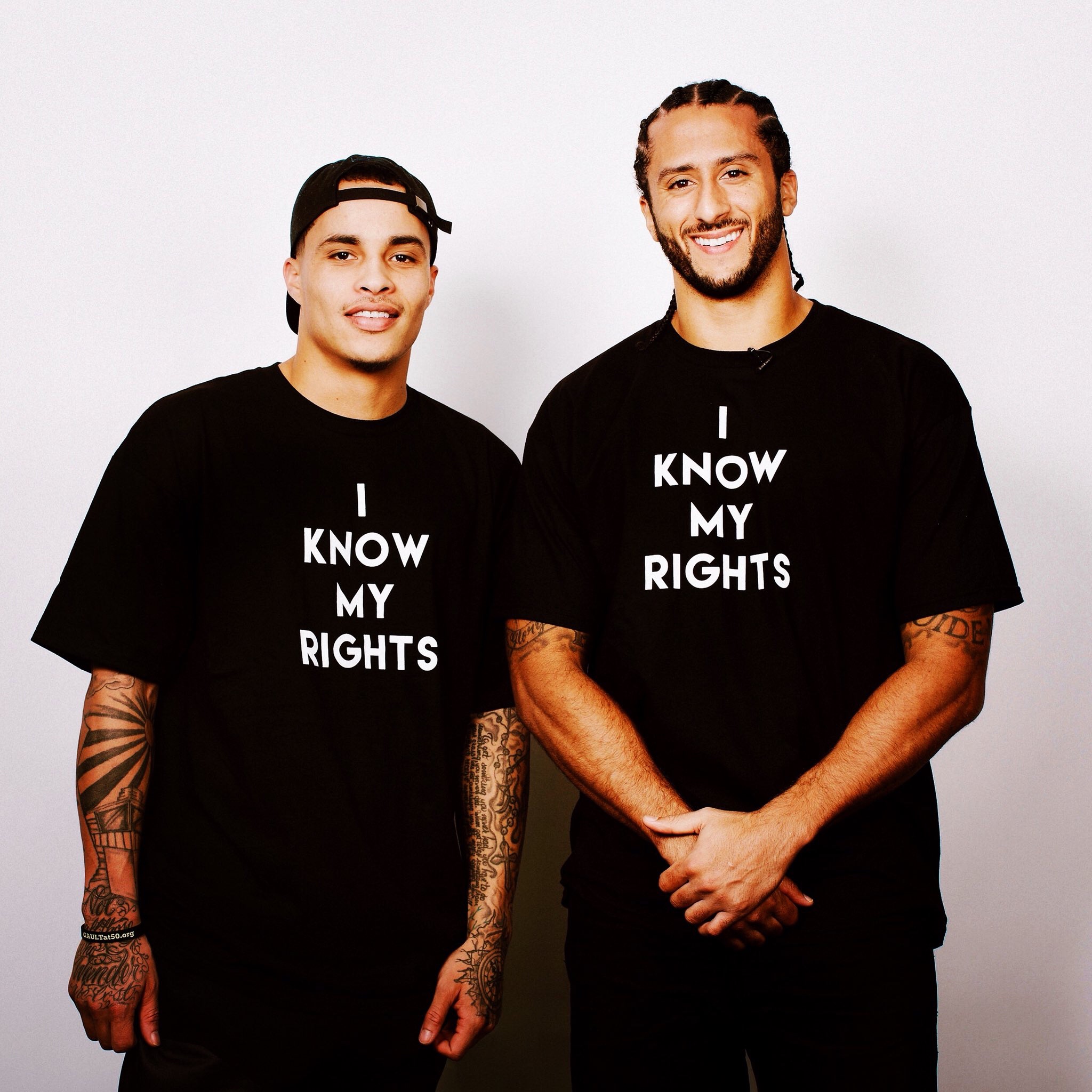 Kaepernick has not been hired by any NFL team since he became a free agent in 2017. He has filed a grievance against the NFL, saying team owners colluded to deny him a job because of the protests.