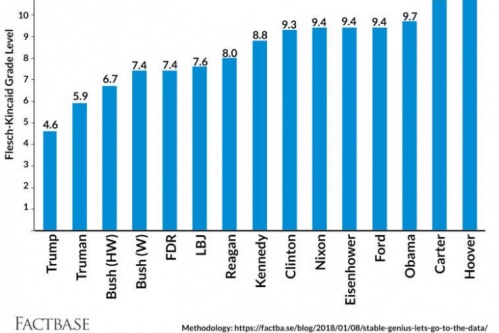 President Donald Trump—who boasted over the weekend that his success in life was a result of “being, like, really smart”—communicates at the lowest grade level of the last 15 presidents, according to a new analysis of the speech patterns of presidents going back to Herbert Hoover.

The analysis assessed the first 30,000 words each president spoke in office, and ranked them on the Flesch-Kincaid grade level scale and more than two dozen other common tests analyzing English-language difficulty levels. Trump clocked in around mid-fourth grade, the worst since Harry Truman, who spoke at nearly a sixth-grade level.

At the top of the list were Hoover and Jimmy Carter, who were basically at an 11th-grade level, and President Barack Obama, in third place with a high ninth-grade level of communicating with the American people.

The Flesch-Kincaid scale was developed in 1975 for the U.S. Navy to assess the relative difficulty of training manuals. A database of Trump’s words, compiled by the incomparable factba.se, ran the comparative analysis yesterday, in response to the president’s claim that he is “a genius.”

Trump has been swinging back hard against on the record allegations in Michael Wolff’s bombshell new book that members of his own team called him “dumb” and “a dope.”

In a Saturday-morning tweet, Trump reminded people that he was elected to the presidency “on my first try.”

“I think that would qualify as not smart, but genius….and a very stable genius at that!” He also tweeted hat “throughout my life, my two greatest assets have been mental stability and being, like, really smart.”

In comments at Camp David later, he added that he was “a very excellent student” and “came out and made billions and billions of dollars … ran for president one time and won.”

The website excluded communiques issued by the last two presidents on social media and limited the study to unscripted words uttered at press conferences and other public appearances.

The words were run through a variety of lexicological analyses, besides the Flesch-Kincaid, and the results were the same. In every one, Trump came in dead last. Trump also uses the fewest “unique words” (2,605) of any president—Obama was the best at 4,869—and uses words with the fewest average syllables, with 1.33 per word, compared to positively multi-syllabic president Hoover at 1.57.

“By every metric and methodology tested, Donald Trump’s vocabulary and grammatical structure is significantly more simple, and less diverse, than any President since Herbert Hoover, when measuring “off-script” words, that is, words far less likely to have been written in advance for the speaker,” Factba.se CEO Bill Frischling wrote. “The gap between Trump and the next closest president … is larger than any other gap using Flesch-Kincaid. Statistically speaking, there is a significant gap.”

The White House is furious at Wolff’s book, Fire and Fury, but the book makes a compelling case that West Wing insiders do not have confidence in the president.

National security adviser H.R. McMaster reportedly called Trump an “idiot” with the intelligence of a “kindergartener” back in November. Secretary of State Rex Tillerson reportedly called the president “a fucking moron.”

And Trump’s National Economic Council chief Gary Cohn allegedly wrote in an email that the White House was in chaos.

“It’s worse than you can imagine. An idiot surrounded by clowns,” Cohn wrote. “Trump won’t read anything—not one-page memos, not the brief policy papers; nothing. He gets up halfway through meetings with world leaders because he is bored. And his staff is no better.”

One member of that staff, Stephen Miller, had to be physically escorted from CNN’s State of the Union talk show on Sunday in a dispute with host Jake Tapper. Miller declined to discuss specific issues, but repeatedly defended the president.