On Thursday, ecologists at the University of California, Berkeley, released a study published in Science Magazine that indicates animals are adjusting their habits to avoid the stresses of human encroachment on their habitat.

It seems that a number of mammalian species have become nocturnal in an effort to avoid us.

Scientists admit that this probably works for the animals, but could have potential “ecosystem-level consequences” we don’t yet fully understand.

It’s been acknowledged in the past that mammals have been adjusting to the presence of humans by moving less, retreating to remote areas, and spending less time looking for food, according to Phys.org, who spoke with Gaynor, the leader of the study. All these altered behaviors contribute to overall stress in the animals.

Gaynor’s study indicates that even things like camping and hiking could be having a negative effect on wildlife.

“It suggests that animals might be playing it safe around people,” said Gaynor. “We may think that we leave no trace when we’re just hiking in the woods, but our mere presence can have lasting consequences.” 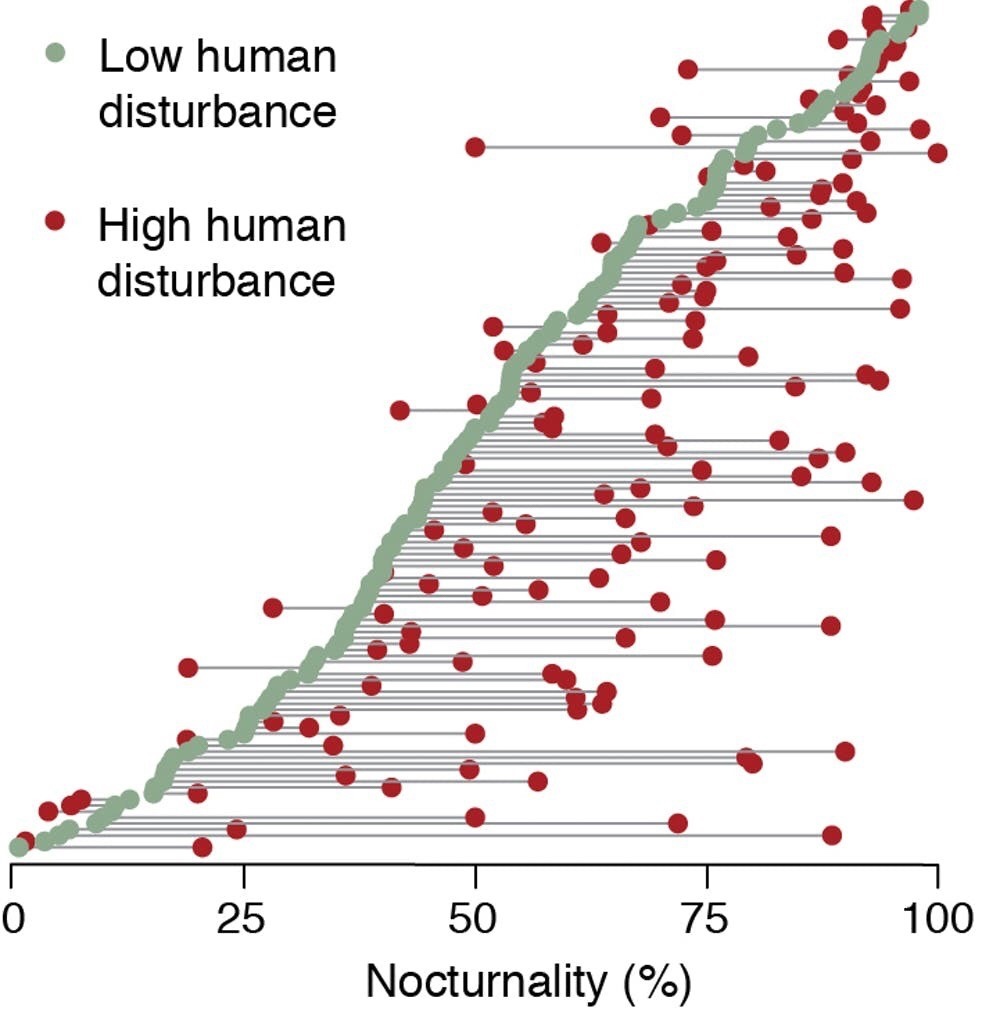 The research was a cumulative meta-analysis of 76 studies of 62 species from six continents. That analysis revealed an increase in the nocturnality of animals in response to disturbance from humans by an average factor of 1.36.

It didn’t matter what continent they looked at, the findings were fairly consistent across species, habitats, and the activities of humans in the area, from hunting to farming.

While this shows remarkable adaptability in the animals, scientists warn “such responses can result in marked shifts away from natural patterns of activity, with consequences for fitness, population persistence, community interactions, and evolution.”

Some of the animals in the study included Tanzanian lions, otters in Brazil, coyotes in California, wild boars in Poland, and tigers in Nepal, showing a remarkable diversity of animal behavior changing across environment and species.

But it’s not necessarily all bad. There are animals that can be suited to life as night owls.

This would allow humans to share the environment with “many other species that are just taking the night shift while we’re sleeping.”

The comprehensiveness of the data is remarkable to other scientists, as this sort of information hasn’t been so exhaustively compiled before. Ecologist Marlee Tucker of Goethe University Frankfurt in Germany, helped with some aspects of the study, and remarked how it changed her perspective on the effect humans have on other living creatures.

“It’s a little bit scary,” she said. “Even if people think that we’re not deliberately trying to impact animals, we probably are without knowing it.”