A woman trapped between a train and a platform in Boston, with her bone exposed through her thigh, pleaded with bystanders not to call an ambulance, asking them “do you know how much an ambulance costs?”

The accident happened on Friday, and a Boston Globe reporter on the scene described how the woman slipped between the subway train and the platform, trapping her leg. Left “in agony and weeping” as commuters rocked the train back and forth in an effort to free her, she begged them not to call an ambulance, as she said, “It’s $3000…I can’t afford that.”

Awful scene on the orange line. A woman’s leg got stuck in the gap between the train and the platform. It was twisted and bloody. Skin came off. She’s in agony and weeping. Just as upsetting she begged no one call an ambulance. “It’s $3000,” she wailed. “I can’t afford that.”

9,748 people are talking about this

In a series of follow-up tweets this Tuesday, the reporter explained that the woman was eventually freed from the five-inch gap and suffered no broken bones. Sitting on the platform in pain, she was reportedly crying, worried about how the accident would affect her financially.

Emergency personnel on the scene bandaged the unidentified woman’s wound, and sent her to the hospital. While she had no broken bones, they still said her injuries would require surgery.

According to the reporter, Maria Cramer, the woman’s ambulance ride cost her roughly $1,200, still a hefty fee for anyone. That price tag does not include the cost of actual medical care, room and board at the hospital, drugs, bandages, or ay of the myriad of other expenses that make American healthcare among the most expensive in the world.

Cramer’s tweet went viral, and it is being held up as a damning indictment of the American healthcare system.

Incredibly sad. A woman badly hurt in the Boston subway system begged good Samaritans not to call an ambulance for her. “Do you know how much an ambulance costs?”

Transit police released surveillance footage from the moment a woman’s leg became caught between an Orange Line train and an MBTA platform in Boston, badly injuring her. The incident happened around… 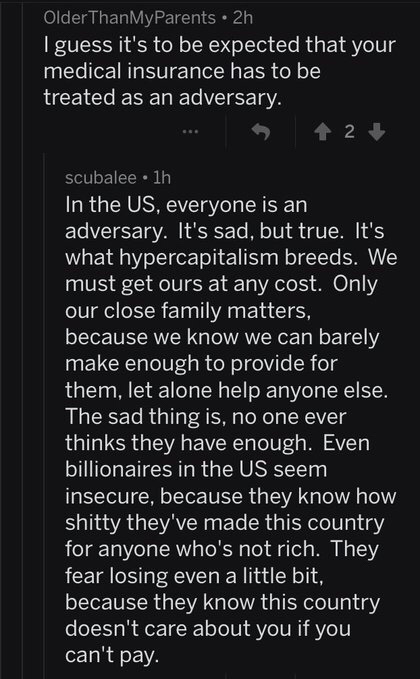 always interesting to watch people from other countries realize what health care is like in America—and Americans explaining it to them. Happy 4th.

55 people are talking about this

America is the only industrialized country in the world whose political class generally believes it is too radical and extremist to guarantee that people don’t die from a lack of basic healthcare.

1,340 people are talking about this

Replying to @AutomationBias and 2 others

My wife just got sick while we were on vacation out of state. Despite having health insurance, we had no idea whether she could see a doctor. She has a PhD. We have money. After multiple calls to insurance, we were still left with an ambiguous answer.

The system is designed to assume that you never go anywhere but to a job and home, so you have to buy additional travel insurance if you dare cross a state line EVER. It’s barbaric, outdated, and just unrealistic.

81 people are talking about this

People in the US spend more on healthcare than people in other first-world countries. According to the Organization for Economic Cooperation and Development, hospital costs in America are 60 percent higher than in 12 other developed nations.

8/ The injured woman said the ambulance would cost her $3000. EMS tells me the price would have been more like $1200 for someone with her injuries. That’s still a hefty price tag.

9/ In Massachusetts, people are required to have health insurance but deductibles can add up to $6,000 for individuals and $12,000 for families, according to Brian Rosman, policy director of Health Care for All – @HCFA