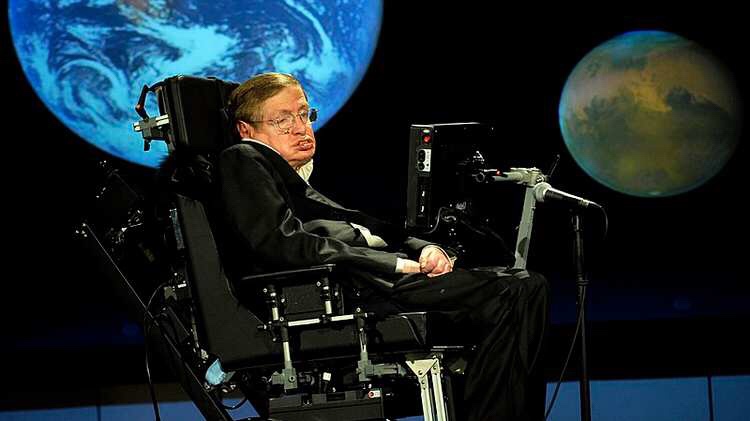 Family, friends, and fans of Stephen Hawking gathered in London on Friday to bid farewell to the renowned physicist, who died on March 14 at the age of 76. Hawking was laid to rest in Westminster Abbey, near the tombs of fellow British science luminaries Isaac Newton and Charles Darwin, an honor commensurate with the enormous impact of Hawking’s life and work on the world.

But while his earthly remains have now been interred for posterity, there was also an unearthly component to the funeral service. A six-minute recording of Hawking advocating for planetary preservation, arranged with music by Greek musician Vangelis, was transmitted into space by a European Space Agency dish in Spain during the ceremony. The composition, entitled “The Stephen Hawking Tribute,” does not appear to be available to the public yet, but a CD copy was given to the funeral guests.

The message’s target is 1A 0620-00 (aka V616 Monocerotis), the closest known black hole to Earth, which is located 3,500 light years away. Sometime around the year 5500, Hawking’s voice will reach this otherworldly destination, and sweep past it to new cosmic frontiers. It’s a fitting tribute to a man who untangled fundamental mysteries about the universe, and raised human awareness about black holes more than any other public figure.

Hawking’s speech, delivered through his electronic communication device, was also played at Westminster Abbey for the roughly 1,000 people in attendance, who hailed from over 100 nations (around 25,000 people had applied for tickets to the event). In another cheeky nod to Hawking’s interests and sense of humor, applicants had been asked to select their birthdays from a date range extending to December 31, 2038—an open invitation to future time travelers who may have not been born yet.

At Hawking’s request, the memorial stone marking his grave is inscribed with his influential entropy equation describing black hole dynamics. The tomb also includes a figure of a black hole, and the words: “Here Lies What Was Mortal Of Stephen Hawking.” As for his immortal legacy—his wisdom, warmth, and curiosity—that will live on Earth, and off it.