While more than three in four Americans do not believe lying is the American way, two-thirds of U.S. residents say people lie to them, at least, some of the time, according to an exclusive THIRD RAIL WITH OZY-Marist poll.

In fact, many Americans think dishonesty exists at even the highest level of American society. A majority of U.S. residents perceive President Donald Trump to be someone who lies, and nearly half assert that foreign leaders should wait to see what President Trump does rather than listen to what he has to say.

76% of Americans disagree with the statement, “Truth is overrated, lying is the American way,” while 18% consider it an accurate characterization of today’s culture.

55% of Americans, including 19% of Republicans, say President Trump is someone who lies.  35% say he is someone who tells the truth.  But, is the president all bluster?  Nearly half of Americans, 49%, including 38% of Republicans, say foreign leaders should wait to see what the president does and not listen to what he says.  35% of residents think global leaders should take President Trump’s statements seriously, and 16% are unsure. 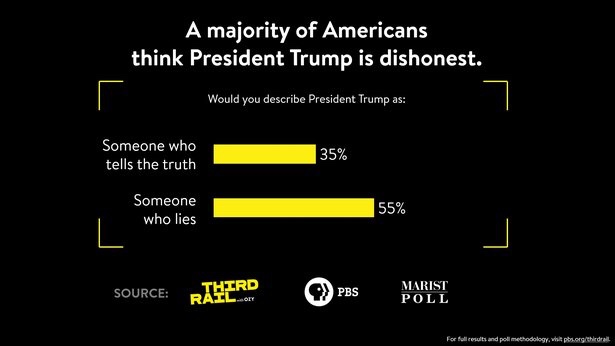