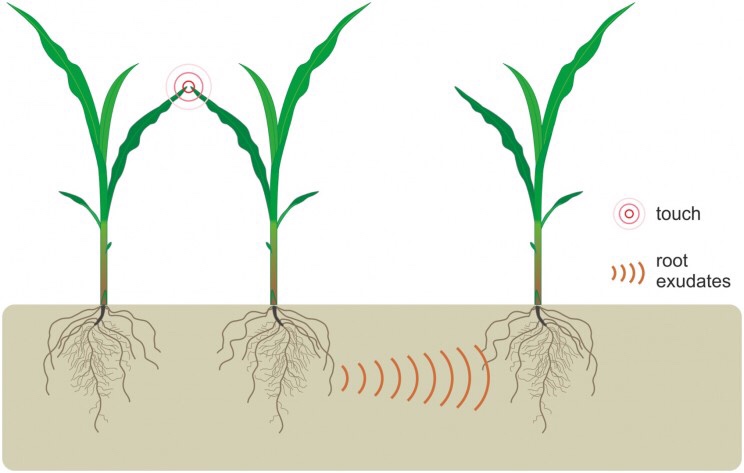 A study published this week in the journal Plos One showed that plants communicate with each other in a new unique way. The paper, entitled “Aboveground mechanical stimuli affect belowground plant-plant communication,” illustrates that plants use their roots to prompt their neighbors to grow, when in crowded competitive environments, by secreting chemicals.

“If we have a problem with our neighbors, we can move flat,” Velemir Ninkovic, an ecologist at the Swedish University of Agricultural Sciences in Uppsala and lead author, told The Guardian. “Plants can’t do that. They’ve accepted that and they use signals to avoid competing situations and to prepare for future competition.”

28 year old man was in surgery to remove a cancerous tumor, but instead the doctors found a 2 inch fir tree.

There is no dark side to the Moon; both sides see the same amount of sunlight but only one side is seen from Earth, as the moon rotates on its own axis.

There are about 1 million species of marine life that live in the world’s oceans. On average, 2,000 species are described and named each year.

The average tree is actually 99% dead, with only 1% of it having living parts like the roots, leaves, and phloem.

Evidence that plants communicate in some form has been around for a few decades. Back in 1997, University of British Columbia forestry professor Suzanne Simard discovered the first pieces of research that would lead to the “fungal internet” theory.

Simard first found evidence that Douglas fir and paper birch trees transfer carbon between them via mycelia. This leads her to theorize that trees communicate with each other using a mycelia network that connects their roots allowing them to transfer information, in other words: a fungal internet.

Simard then postulated that large trees help out smaller younger ones by using this fungal network. In the 2011 documentary Do Trees Communicate?, Simard said these trees “are interacting with each other, trying to help each other survive.”

Then in 2010, South China Agricultural University’s Ren Sen Zeng found that during attacks by nefarious fungi, plants would release chemical signals into the mycelia to warn other plants. “We suggest that tomato plants can ‘eavesdrop’ on defense responses and increase their disease resistance against potential pathogen,” Zeng and his colleagues wrote in another Plos One study.

Additionally, other studies have shown that plants adapt their growth strategies as a response to stimuli from other plants. Some trees thwart their growth under crowded competitive conditions while others redirect their resources to expand more aggressively above ground.

Ninkovic’s study now illustrates that these communications and adaptions also happen in response to chemical secretions in the soil. The researcher and her team tested their theory on corn seedlings, known for increasing their growth in stressful conditions.

The team began by stroking the leaves of plants for a minute each day using a makeup brush in order to simulate the touch of a nearby plant. They then placed a new plant in the stimulated plant’s growth solution.

This new research is a step further in understanding plants’ complex and formerly believed to be Darwinian world. However, luckily, it seems that it is not simply survival of the fittest for these forestry mates. Between, warning each other and simply redirecting their resources to adapt to their neighbors, plants seem to be doing a better job at coexisting than humans.