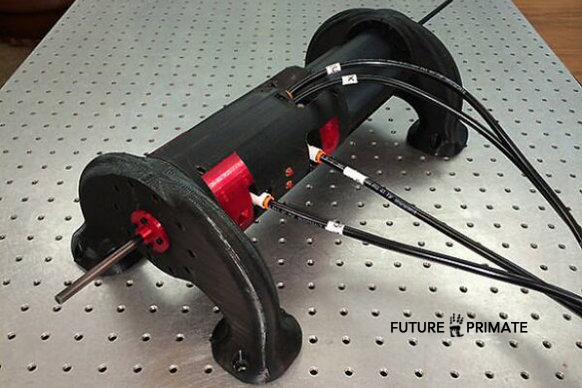 The only way doctors can currently treat patients with uncontrollable epilepsy is through brain surgery, which involves isolating or removing the part of the brain that is responsible for seizures. The procedure is extremely invasive and dangerous, as it involves drilling deep into the skull.

A team of Vanderbilt University engineers in the US were determined to develop a less intrusive method of surgery – and five years later they have successfully developed a robotic device capable of performing the procedure less invasively. The device enters through the patient’s cheek, where it can proceed into the brain, avoiding the need to drill through the skull. The prototype was revealed by David Comber, lead designer of the device, in a live demonstration earlier this week at the Fluid Power Innovation and Research Conference in Nashville, US.

The nifty device is a shape-memory alloy needle (a metal that ‘remembers’ its original shape) that is able to steer along the curved pathway from the cheek into the brain. When operating, the robotic platform steers the needle using compressed air, inserting it in tiny steps, allowing its position to be tracked by progressive MRI scans. The needle itself is 1.14 mm thick, and made of nickel-titanium, which allows it to operate inside the powerful magnetic field created by the MRI scanner. The researchers tested the needle in the lab and found it to have a very high precision for the required operation.

The next stage in the development of the device is to test it with cadavers, and the team estimates that the needle will be ready for use within the next decade. To keep the costs down, the innovative design enables the needle to be made using 3D printing.

In the past, neuroscientists hadn’t been able to adopt the through-the-cheek method to surgery because straight needles are unable to reach certain areas of the brain, particularly in epilepsy, where the affected region is located at the bottom part of the brain. The ‘robotic curved needle’ could revolutionise the future of brain surgery, giving doctors access to less invasive operating procedures.

“The systems we have now that let us introduce probes into the brain – they deal with straight lines and are only manually guided,” said Joseph Neimat, Associate Professor of Neurological Surgery at Vanderbilt, in a press release. “To have a system with a curved needle and unlimited access would make surgeries minimally invasive. We could do a dramatic surgery with nothing more than a needle stick to the cheek.”