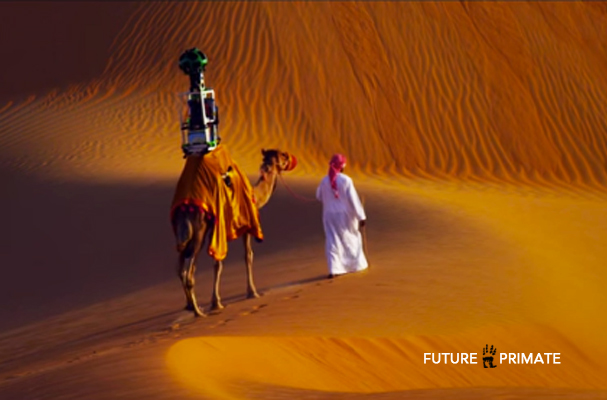 It’s given us robot cars and internet-enabled glasses — but when it came to creating a “Street View” of a desert, Google hit on a low-tech solution.

It hired a camel.

The beast has become the first animal to carry Google’s Trekker camera, which is typically hoisted by humans to capture 360-degree images of destinations inaccessible to its Street View cars.

Google spokeswoman Monica Baz says the camel, reportedly named Raffia, was an apt way of documenting the beautiful shifting sands of Abu Dhabi’s Liwa Oasis. “With every environment and every location, we try to customize the capture and how we do it for that part of the environment,” she told The National newspaper.

“In the case of Liwa we fashioned it in a way so that it goes on a camel so that it can capture imagery in the best, most authentic and least damaging way,” Baz said. The Liwa Oasis is a 100 kilometer-wide (62-mile) scenic desert, southeast of the city of Abu Dhabi that includes some of the world’s biggest sand dunes.

Street View Treks have previously explored sites including the Grand Canyon, Mount Everest, the Eiffel Tower, the Egyptian pyramids and the complexes of temples around Angkor Wat in Cambodia. There’s even an subaquatic Trek of waters around the Galapagos islands.

Of course, while the camel can only be seen in shadow on the images it captured, Google’s Street View cars have witnessed plenty of other bizarre sights. Earlier this year one clocked what appeared to be the scene of an ax murder on the streets of Edinburgh.

It later turned out to be a prank staged by auto mechanics who’d spotted the car on its approach.

Another hoax involved a woman pretending to give birth on a roadside. The service, which began in 2007, has also hosted more startling sights such as a naked guy climbing out the trunk of a car and a man with the head of a horse.