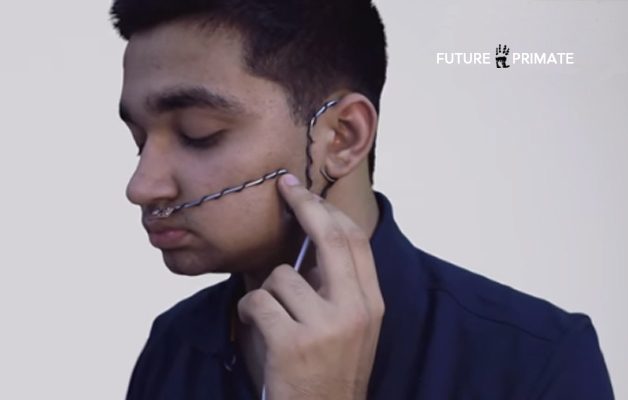 A 16-year-old from India has designed a device that converts breath into speech. High-school student Arsh Shah Dilbagi invented TALK as a portable and affordable way to aid people suffering from ALS, locked-in syndrome, and anyone else speech-impaired or paralyzed. Prototyped using a basic $25 Arduino microcontroller, Dilbagi’s invention costs only $80, or about a hundred times less than the sort of Augmentative and Alternative Communication device used by Stephen Hawking.

TALK works by translating breath into electric signals using a MEMS Microphone, an advanced form of listeningtech that uses a diaphragm etched directly onto a silicon microchip. The user is expected to be able to give two distinguishable exhales, varying in intensity or time, so that they can spell words out using Morse code.

A microprocessor then interprets the breathes into dots and dashes, converting them into words. The words are then sent to a second microprocessor that synthesizes them into voice. The morse code can either be translated into English, or specific commands and phrases. The device features nine different voices varying in age and gender.

In his video explaining the device, Dilbagi (who prefers the nickname “Robo”) notes that 1.4 percent of the population suffers from these sorts of disorders and they experience a lower life-expectancy in part due to lack of expression. With his affordable device, he has the potential to improve the lives of millions by giving them a means of communicating.

“After testing the final design with myself and friends and family, I was able to arrange a meeting with the Head of Neurology at Sir Ganga Ram Hospital, New Delhi and tested TALK (under supervision of doctor and in controlled environment) with a person suffering from SEM and Parkinson’s Disease,” Robo wrote in his project report. “The person was able to give two distinguishable signals using his breath and the device worked perfectly.”

Dilbagi was the only finalist from Asia in Google’s Global Science Fair, a competition open to 13 to 18 year old thinkers. Voting takes place online through today. Other projects submitted by teen geniuses include robots modeled after fruit flies; a new way to identify quasars; and an ultrasonic burner that reduces greenhouse gas emissions from car engines.