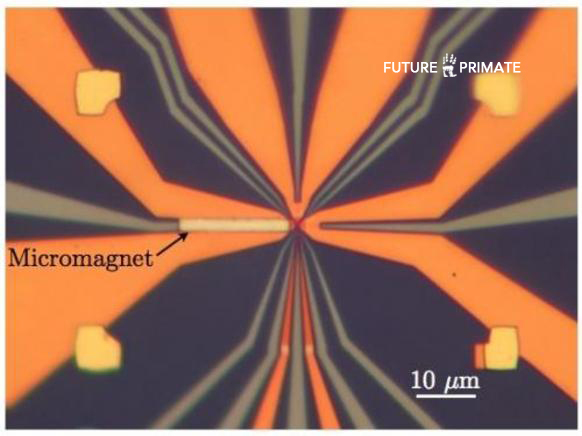 The ubiquitous classical digital computer encodes data in bits (a portmanteau of binary and digits) in either a 0 or 1 state. On the other hand, while a quantum computer also uses 0/1 data representation, these qubits (from quantum and bits), qubit states 0 and 1 can be simultaneously in what is known as a superposition – and a quantum computer can also make use of entanglement. For these reasons, quantum computers can potentially solve problems whose complexity is too resource-intensive for classical computation. That being said, quantum computers are very difficult to construct. Recently, however, scientists at University of Wisconsin, Madison have fabricated a qubit in a silicon double-quantum dot in which the qubit basis states are the singlet state and the spin-zero triplet state of two electrons. (A double quantum dot links two quantum dots – semiconductor nanostructures that confine the motion of conduction band electrons, valence band holes, or excitons in all three spatial directions.) Moreover, the researchers have for the first time integrated a proximal micromagnet, allowing them to create a large local magnetic field difference between the two sides of the quantum dot – thereby greatly increasing their ability to manipulate the qubit without injecting noise that would induce superposition decoherence.

Prof. Susan Coppersmith and Prof. Mark Eriksson discuss the paper they and their co-authors published in Proceedings of the National Academy of Sciences with Phys.org, noting that overall goal of the research program is to develop quantum bits for a quantum computer using technology that is similar to that used for current classical computers. “The advantages of this strategy arise for two main reasons.” Coppersmith tells Phys.org. “First, enormous investments have been made to develop large-scale classical electronics, and one hopes that this investment can be leveraged to facilitate scale-up of quantum electronics. Second, the similarity in technology facilitates integration of quantum and classical processors.” Integration is important, Eriksson adds, because a large-scale classical computer will almost certainly be necessary to control the operation of a quantum computer.

An early step towards this goal is to fabricate high-fidelity individual qubits. This paper focuses on the so-called singlet-triplet qubit, which was first fabricated in gallium arsenide (GaAs) devices. “The operation of a singlet-triplet qubit in GaAs is complicated by strong coupling between the electron spins and nuclear spins, Eriksson explains. “Silicon has much weaker coupling between the electron spins and nuclear spins, and most of the nuclei in silicon have spin zero, so the electron spins in silicon can stay coherent much longer than in GaAs.” In fact, measurements of a singlet-triplet qubit in natural silicon indeed yield much longer coherence times than in GaAs, but because the qubit operations themselves rely on having a magnetic field difference between the dots – a difference that also arises from the nuclei themselves – the qubit operations in that work were much slower than in GaAs. “Our work shows that using an integrated micromagnet enables faster gate operations by imposing a larger magnetic field difference between the quantum dots,” Coppersmith points out, “and it does so without introducing measurable additional decoherence, which improves the overall performance of the qubit.”

Specifically, the paper states that the integrated micromagnet provides a promising path toward fast manipulation in materials with small concentrations of nuclear spins, including both natural silicon (Si) and isotopically enriched 28Si. “Nuclear spins in GaAs and other materials, such as InSb (Indium Antimonide), reduce qubit coherence – but this strong coupling also enables fast manipulation,” Eriksson tells Phys.org. “However, if the decoherence effects are reduced by using a material with weaker coupling to nuclear spins, it’s necessary to find another way to create a large magnetic field difference between the quantum dots – and the integrated micromagnet enables this.”

“One big challenge was fabricating a suitable device, that being a double quantum dot in which a micromagnet is incorporated,” Coppersmith continues. Devices with incorporated micromagnets had previously been investigated in GaAs in a slightly different context, but the fabrication procedure in the University of Wisconsin devices differs from that used in the GaAs devices, requiring novel processes to be developed. “A further challenge arose because the micromagnetic field was somewhat different than what was expected based on measurements of cobalt films and our numerical calculations,” notes Eriksson. “Therefore, to perform the experiments we had to use the properties of the qubit itself to figure out what the actual fields on the quantum dots were.” By so doing, the researchers found that the field from the micromagnet depended on the applied uniform field, which enabled them to investigate the qubit properties for two magnitudes of the micromagnet field.

Interestingly, the paper states that the scientists’ fabrication techniques being similar for both quantum dot-based qubits and donor-based qubits in semiconductors suggests that micromagnets should also be applicable to donor-based spin qubits. “The micromagnet in the device that we measured is created by depositing the metal cobalt by Electron Beam Physical Vapor Deposition (EBPVD), onto the top of the sample,” Coppersmith says. “Therefore, applying the technique to other semiconducting qubit architectures in which the qubits are defined by evaporated metal top gates is rather straightforward.” (EBPVD uses an electron beam to bombard a target and convert some of its atoms into a gas, which then precipitate and coat all surfaces in the vacuum chamber.) In practice, however, some of the gates on these devices will be made of non-magnetic materials – typically aluminum or gold –resulting in a small number of cobalt gates.

The researchers also describe the unique characteristics of a large-scale quantum computer based on their approach: Once high-quality single qubits and two-qubit gates are achieved, then because the technology is close to that already used in classical electronics and the qubit size (< 1µ) is small, scaling up to devices with large numbers of qubits could be feasible. This plausible path to large numbers of qubits has sparked significant interest in electrically-gated qubits in semiconductors.

“The next steps in our research are to increase both the magnitude of the field difference between the quantum dots, and the number of qubits by increasing the number of quantum dots,” Coppersmith tells Phys.org. “Both steps are being implemented in new devices that have been designed and are currently being fabricated. We’re also working on other qubit implementations in silicon quantum dots1,2, all of which use electrical initialization, manipulation and readout, and therefore have the potential advantages of integrability and scalability.” Moreover, Eriksson points out that being able to control local magnetic fields in a nanoelectronic device could be very useful for spintronics.