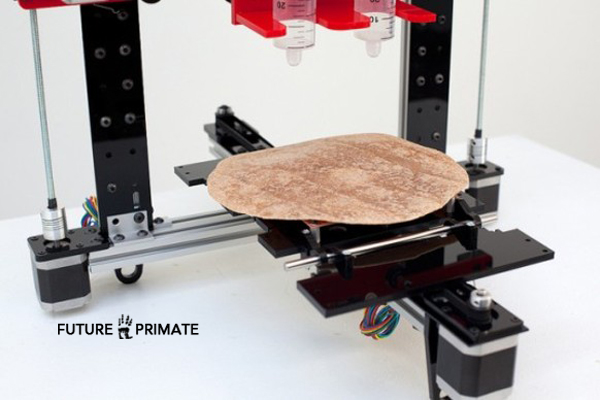 Marko Manriquez has designed the Burritob0t, an incredible 3D printer that can whip up an edible burrito in just a few minutes! The recent New York University graduate created the contraption as his thesis for NYU’s Interactive Telecommunications program. Manriquez describes the Burritob0t as the merging of gastronomy with digital fabrication. Could his invention eventually usurp the food truck?

Burritob0t started as a research project, and then Manriquez threw himself into the what is now based on open-source DIY. Using standard 3D printing Arduino hardware and a bevy of software programs, this 3D printer is tasked with doing more than cramming ingredients into a large tortilla. Manriquez has always been passionate about food as an artistic medium, and to that end he approaches this 3D burrito printer as a way to explore the effects that fast food has on the environment and society.

Since Manriquez launched Burritob0t, he has asked himself several questions. Where does our food really come from? What chemicals are in it? Why have food allergies been on the rise? What are the labor practices that go into food preparation? And finally, what is the relationship between food scarcity and inequality when it comes to the ability to source fresh ingredients?

The contraption resembles a pasta machine that has been picked apart and looks more at home in a medical laboratory than a kitchen appliance. Two syringes attached to an extruder deposit ingredients onto a tortilla thanks to G-Code that sends the coordinates of the burrito-to-be to the printer. For now only pasty ingredients like refried beans or guacamole can work; in fact, for now Manriquez advises against trying chunky salsa or lettuce. But for Manriquez, this is more than creating another kitchen appliance. At a higher level, the goal is to foster questions about how food is gathered and consumed. If Burritob0t can serve up burritos faster and cheaper than the local fast food joint, the consumer wins. Currently Manriquez has no plans to commercialize the Burritob0t, but he will start a Kickstarter campaign in July so he can score the funds to perfect this handy DIY burrito maker.