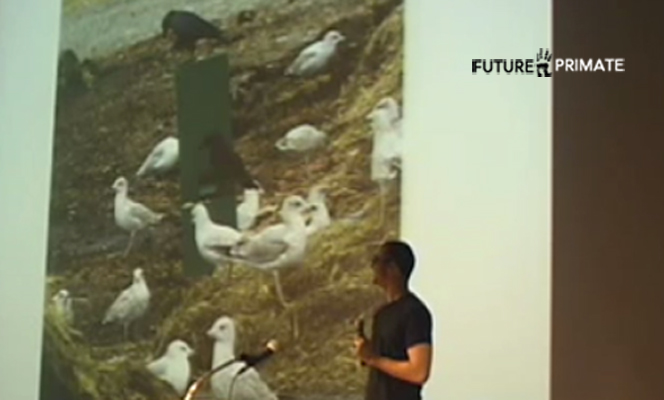 Hacker Josh Klein wowed attendees this weekend at TED — the Technology, Entertainment and Design conference — with his “crow vending machine,” a device that gives the birds peanuts for depositing a coin. It’s all part of Klein’s plan to train crows to save human lives.

Just wrapping up in Monterey, Calif., TED gives inventors 18 minutes to wow an audience of people who each paid $6,000 to be blown away by new ideas. Klein’s game plan? To explain “why crows are better than flying monkeys, and how you can teach them to do your bidding.”

Klein says this all started when he used a modified version of Skinnerian training to teach his cat to use the toilet, and it worked really well. That made him think that he might be able to use the method with crows. The first inklings that he would work with crows came about 10 years ago, at a cocktail party, when he argued that harnessing the birds to do something useful would be a much better plan for his native Seattle, plagued by crows, than mass slaughter.

In the first two steps of his four-step experiment, Klein says he provides crows with coins, peanuts and the vending machine, in order to get them used to the materials. Then he provides the birds only with coins, and in frustration they bang around until the coin gets in the machine’s slot. That introduces the next step, when the machine dispenses a peanut as a reward for each coin. In the fourth step, he gives the birds nothing. But the crows see that coins have been spread on the ground near the machine. This reveals what’s special about crows. Squirrels, for example, look at the box a half-dozen times, then disappear to play in traffic. Crows make the connection: Pick up the coin, put it in the box and receive a reward.

How will Klein extrapolate his findings for the greater good? His central idea is that certain species have adapted to human environments. We try to kill off adaptive pests like roaches, rats and crows, but we’re breeding them to be parasites. Roaches are immune to poison, rats have responded with rapid breeding. But a better goal, Klein says, is to seek an interspecies harmony. You could train crows to sort electronics, he says. They could pick up trash. And, Klein says, because the birds can distinguish individual human faces, they could help with search and rescue. “Don’t hate the crows,” Klein says. “Just let them save you.”