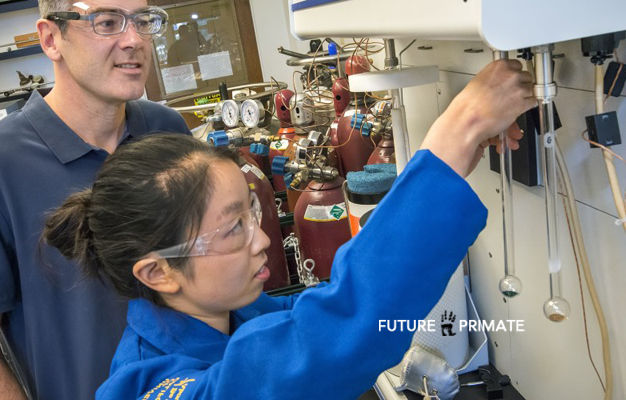 A new material, designed and patented by researchers at Berkeley Lab, converts ethane to ethanol with an efficiency that could cut natural-gas refining costs.

“Hydrocarbons like ethane and methane could be used as fuel, but they’re hard to store and transport because they’re gases,” says Dianne Xiao, graduate student at the University of California Berkeley. “But if you have a catalyst that can selectively turn them into alcohols, which are much easier to transfer and store,” she says. “that would make things a lot easier.”

Xiao and Jeffrey Long, scientist in Berkeley Lab’s Materials Sciences Division and professor of chemistry at the UC Berkeley focused this project on converting ethane to ethanol.

Ethanol is a potential alternative fuel that burns cleaner and has a higher energy density than other alternative fuels like methanol. One problem with ethanol, however, is that current methods for production require extreme heat, which makes it expensive.

The innovation came when Long and Xiao designed a material called Fe-MOF-74, in a class of materials called metal-organic frameworks or MOFs. Because of their cage-shaped structures, MOFs boast a high surface area, which mean they can absorb extremely large amounts of gas or liquid compared to the weight of the MOF itself.

Since MOFs are essentially structured like a collection of tiny cages, they can capture other molecules, acting as a filter. Additionally, they can perform chemistry as molecules pass through the cages, becoming little chemical factories that convert one substance to another.

Previous attempts to add a hydroxyl ion to ethane to make ethanol have required high pressure and high temperatures that range from 200 to 300 degrees Celsius. It’s costly and inconvenient.

But by using a specially designed MOF—one in which a kind of iron was added inside the tiny molecular cages—the researchers were able to reduce the need for extreme heat, converting ethane to alcohol at just 75 degrees Celsius.

“This is getting toward a holy grail in chemistry which is to be able to cleanly take alkanes to alcohols without a lot of energy,” says Long. Long and Xiao worked closely with researchers at the National Institute of Standards and Technology, the University of Minnesota, the University of Delaware, and the University of Turin to design, model, and characterize the MOF and resultant ethanol production.

Next steps involve tweaking the concentrations of iron in the MOF to produce a more efficient conversion, says Xiao. “It’s a promising proof of principle,” she says. “It’s exciting that we can do this now at low temperature and low pressures.”

This research was funded by the U.S. Department of Energy, Office of Basic Energy Sciences, Division of Chemical Sciences, Geosciences, and Biosciences. Reactivity studies were supported by the Laboratory Directed Research and Development Program of Lawrence Berkeley National Laboratory. Work at the Molecular Foundry and experiments performed at the Advanced Light Source were funded by the DOE’s Office of Basic Energy Sciences.