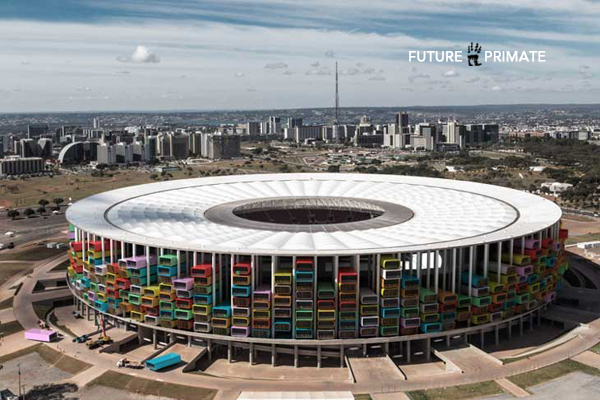 Weeks ago we reported on the human rights violations that were taking place in Brazil to prepare for the World Cup games. An estimated 250,000 people were evicted from their homes to make way for the World Cup games. After the games were over, there were a dozen large stadiums left behind that will mostly lay vacant and unused, after hundreds of thousands of people were forced from their homes.

The project “Casa Futebol” proposes a reappropriation of the stadiums renovated or built for the World Cup using modules of housing of a surface of 105 m ². It is not a question of denying the interest of Brazilians people for the soccer, otherwise of proposing an alternative in the deficit of housing. Stadiums will continue to be used, receiving soccer matches, a part of the ganancies of which can finance the construction and the maintenance of the houses.

With homelessness being such a problem all over the world, people who want to make a difference are starting to think outside of the box to develop creative and peaceful ideas to solve this problem without relying on the force of government. It is interesting in this case that events will continue to happen in the stadium, and that the revenue from those events will be used to fund the housing.

This is similar to a plan that has recently been developed in Europe, where advertisers and activists are joining together to create billboard housing, that will allow homeless people to live in luxurious roadside apartments that have billboards on the side of them. The advertising revenue from the billboards fund the property and utilities, and everyone ends up in a better situation than they were before.

In Brazil and in the rest of the world, poverty is not going to be solved by the government. Average people with unique skills and ideas are going to need to come together peacefully to create solutions to this very complex problem. This story and others like it show that this effort is actually already taking place all over the world.