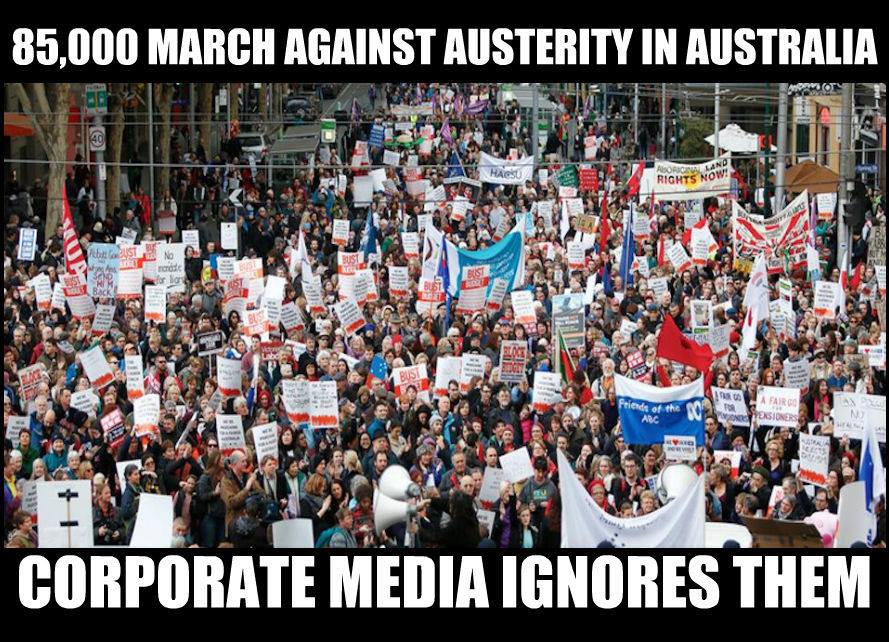 Tens of thousands marched in cities across Australia on Sunday to protest the policies of Prime Minister Tony Abbott following the recent release of his administration’s austerity budget.

The 2014 federal budget has been slammed for measures that critics charge will devastate Australia’s poor, including huge cuts to unemployment and welfare benefits, education, and health care. Abbott’s popularity ratings have tanked following the release, according to recent polls.

The distaste for Abbott by many Australians, however, goes beyond dissatisfaction with Abbott’s economic policies. As a demonstrator and organizer in Sydney told the Guardian: “This is not just a march about the budget. These marches signify major concern with current government policies, dissatisfaction with a stagnant two-party political system, and the disturbing motivations and influence of those with money and power.”

Under the banner ‘March in May,’ protesters marched in Sydney, Brisbane, Melbourne, Adelaide and Perth. Organizers sited huge crowds, including an estimated 50,000 in Sydney, according to the Sydney Morning Herald.

According to multiple media reports, the crowds spanned generations and included many who carried homemade signs expressing a variety of concerns, from mistreatment of indigenous communities and asylum seekers to rising poverty among youth to the secretive Trans Pacific Partnership negotiations.

Protesters traveled from smaller towns and rural areas to urban centers to participate in the rallies, ABC News Australia reports.

Education worker Heather Williams, who marched in Sydney, told ABC News Australia, “I’m very concerned about the young, unemployed [people] under this budget,” she said. “It really worries me. I know a lot of people who tried very hard to get work.”

The May rallies followed similar “March in March” mobilizations that swept 32 towns and cities across Australia in March of this year.