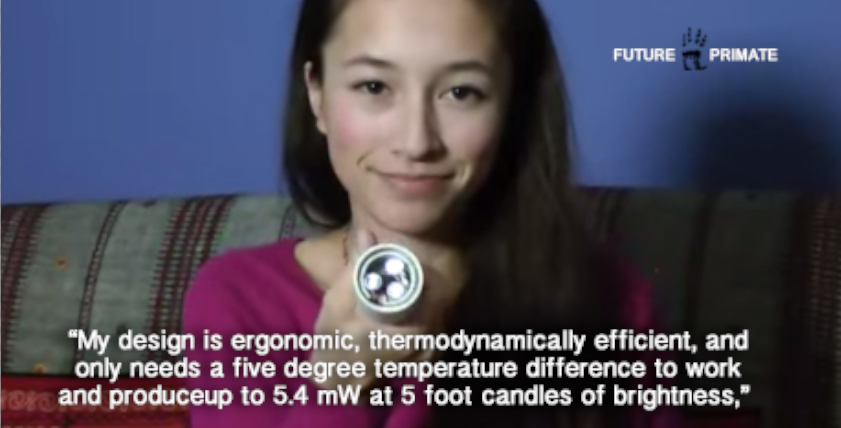 From a sleeping bag that charges your gadgets to entire buildings warmed by body heat, scientists are harvesting the heat emitted by humans as a source of renewable energy. But the latest development in thermoelectric energy generation doesn’t come from a high-tech lab at MIT; it comes from Ann Makosinski, a 15-year-old Canadian girl who developed a flashlight that is powered by the heat from a human hand. With the aim of reducing the number of single-use batteries that are thrown in landfills, Makosinski developed the innovative flashlight, which can be developed cheaply and deployed to populations that can’t afford electricity to light their homes.

To create the thermoelectric flashlight, Makosinski used Peltier tiles, which produce electricity when heated on one side and cooled on the other. Makosinski fashioned the flashlight out of an aluminum tube housed in a PVC tube with an opening to allow a person’s hand to come into contact with the Peltier tiles. “My design is ergonomic, thermodynamically efficient, and only needs a five degree temperature difference to work and produce up to 5.4 mW at 5 foot candles of brightness,” explains Makosinski. The Peltier tiles rely on a temperature differential to transform heat from a human hand into energy to power an LED bulb that burns even brighter when it’s cold outside.

Makosinski sees the flashlight as more than just a novelty; the technology she’s working with could help prevent the unnecessary use of batteries, which leak toxic chemicals into the ground. And it could ultimately provide a cheap, renewable light source to those that lack access to electricity. “I’m really interested in harvesting surplus energy, energy that surrounds but we never really use,” Makosinski told CBC. Makosinski’s flashlight was selected as one of just 15 finalists for the Google Science Fair, earning her a trip to Google’s headquarters in Mountain View and a $25,000 scholarship.